Red Route is a site-specific performance tour in the form of an audio download, created as an unofficial guide to one of the University of Leeds’s most notable architectural features. The Red Route corridor – allegedly “the longest in Europe” when first built – forms the spine of a complex of brutalist, concrete buildings constructed in the 1960s as the centrepiece of the University’s expansionist Development Plan. 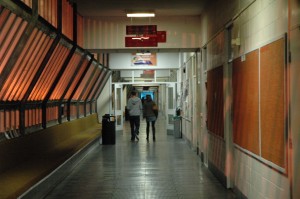 Using the files highlighted below, you can embark on a journey back to the future, as documents from the University Archive are excavated to the tell the tragi-comic tale of the corridor’s construction..

Audio file: To access and download the mp3 file for your own iPod or audio player, please right click here. Don’t left click, as this will open the sound file: for now you just want to save it to your hard drive. You can do this by selecting “Save Link as…” (or equivalent) from the right click menu bar. Once downloaded, you can transfer the file to your iTunes account (or equivalent) for use on your portable player. (In iTunes, just click on “File” in the top left corner of the screen, then select “Add File to Library”, and choose Red Route from whichever folder you’ve downloaded it to.)

Image supplement: You will also need to download and print off this pdf image supplement, to take with you on the tour. You are strongly recommended to print this in colour (or else to view it, in situ, on an iPad or other tablet device).

Now you are ready to go. Just follow the instructions on the first page of the image supplement to get yourself to the starting point for the tour.  If you are interested in further contextualisation before you begin, read on… 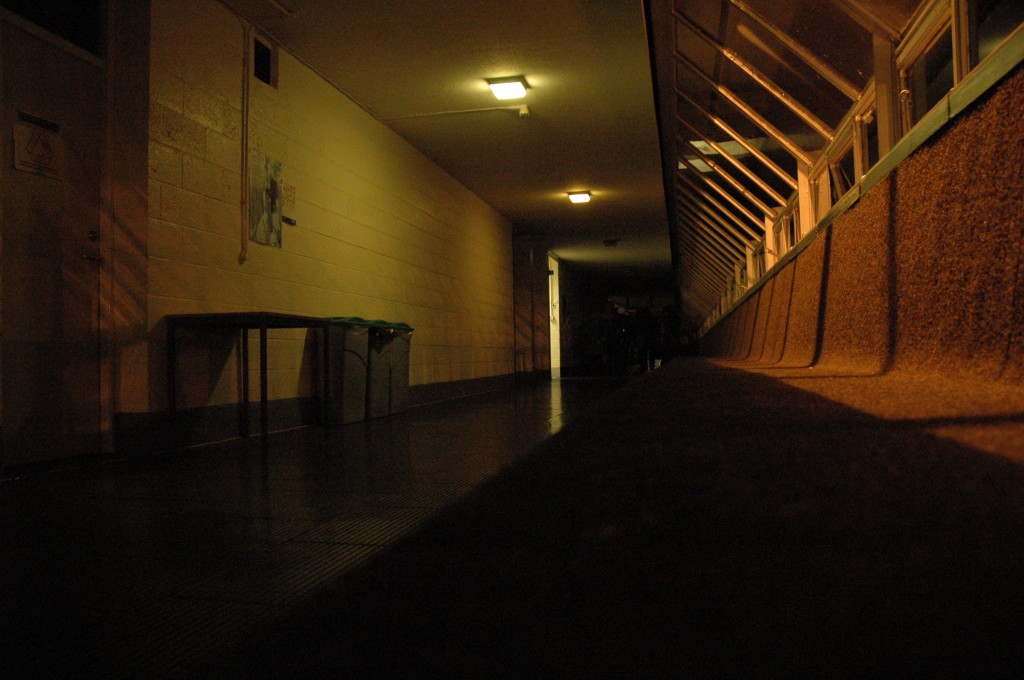 The Red Route corridor at night – at the Earth Sciences end.

Red Route is a story of grand architectural visions, funding cuts, and the persistence of trees. It is the download version of a live performance – Line of Sight – that was originally devised for presentation as part of the City of Leeds’ Light Night celebrations in 2008. 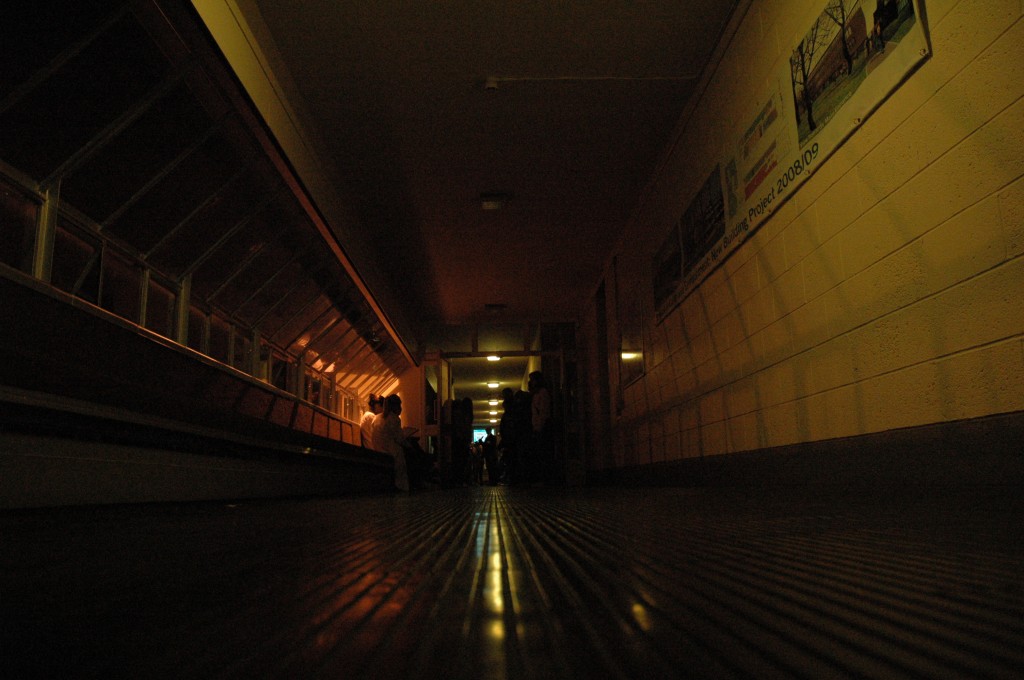 Looking in the direction of Charles Morris Hall – mid-performance.

The photographs presented here were all taken by visual artist Claire Blundell Jones, who collaborated with Steve Bottoms to create the 2008 version of the piece. (They appear here with her permission: all rights reserved.) Claire created an installation for the corridor using non-intrusive audio loops, playing at various locations along it, and a video projection for the end wall (scroll to the bottom of this page to view the video). 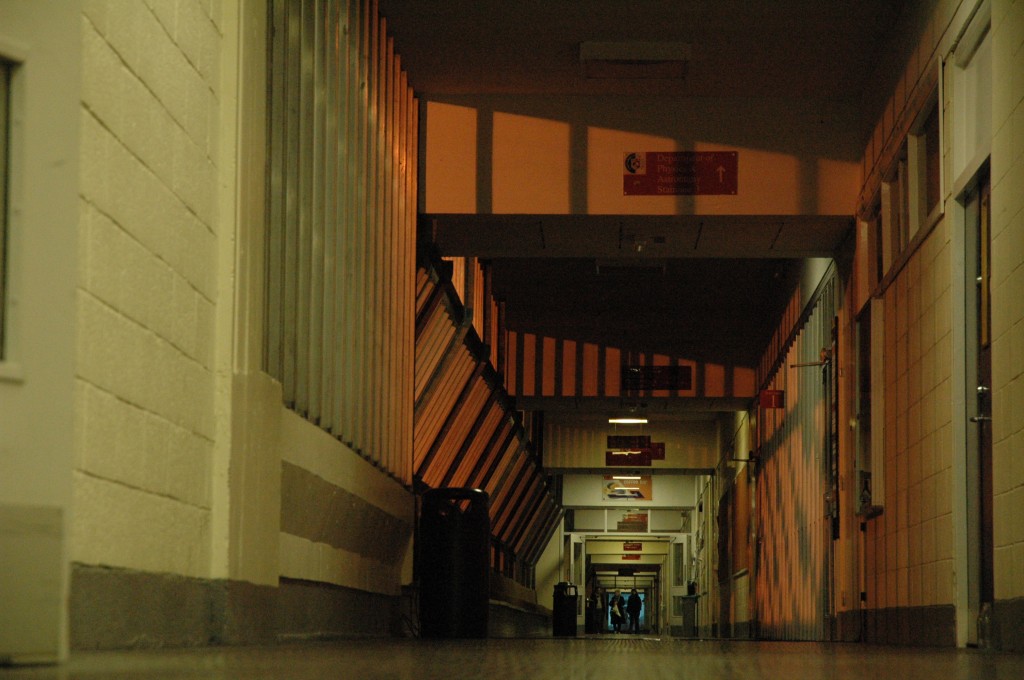 Looking down the length of the Stoner Building, towards Claire’s projection.

Steve constructed a narrative text using documents drawn from the University Archive – with the generous assistance of then-archivist Liza Giffen. (All archive text remains copyright to the University of Leeds, and is used here with permission.) He then guided audiences down the length of the corridor, telling a suitably linear story that spanned the length of the 1960s. Architectural drawings from the archive were projected on the corridor’s walls using a rolling overhead projector. 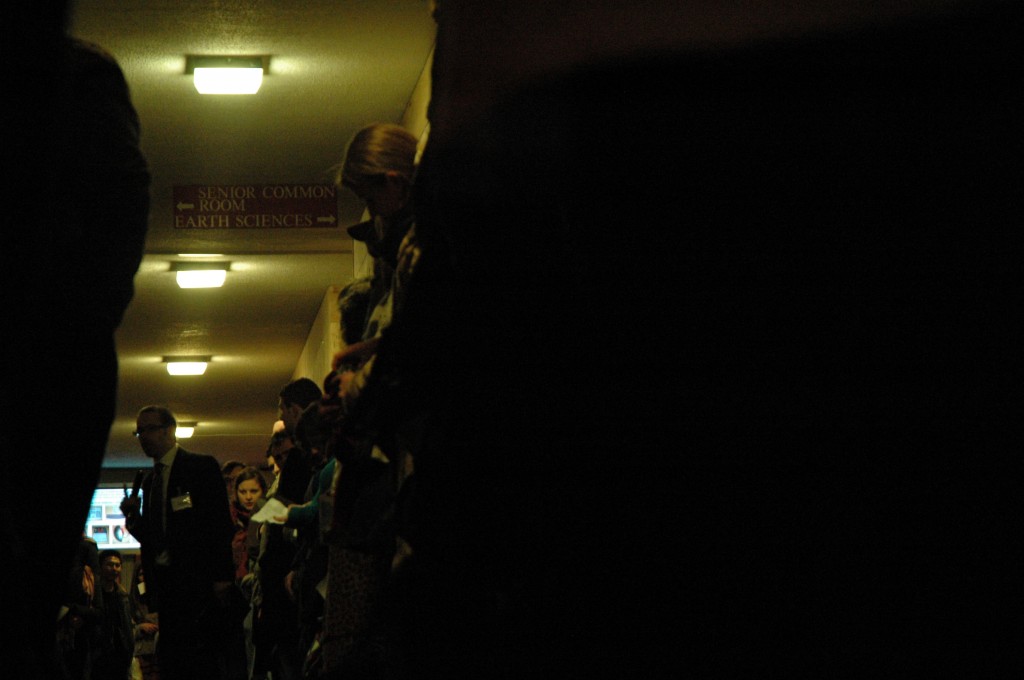 In the 2008 version of the piece, Steve was assisted by three student actors playing the various voices from the archive (Tessa Gillett, Emma Clarke, Ed Attrill). However, when he subsequently revived the performance for Light Night 2011, he streamlined the use of verbatim archive text, and deleted these additional performers – playing the voices himself. 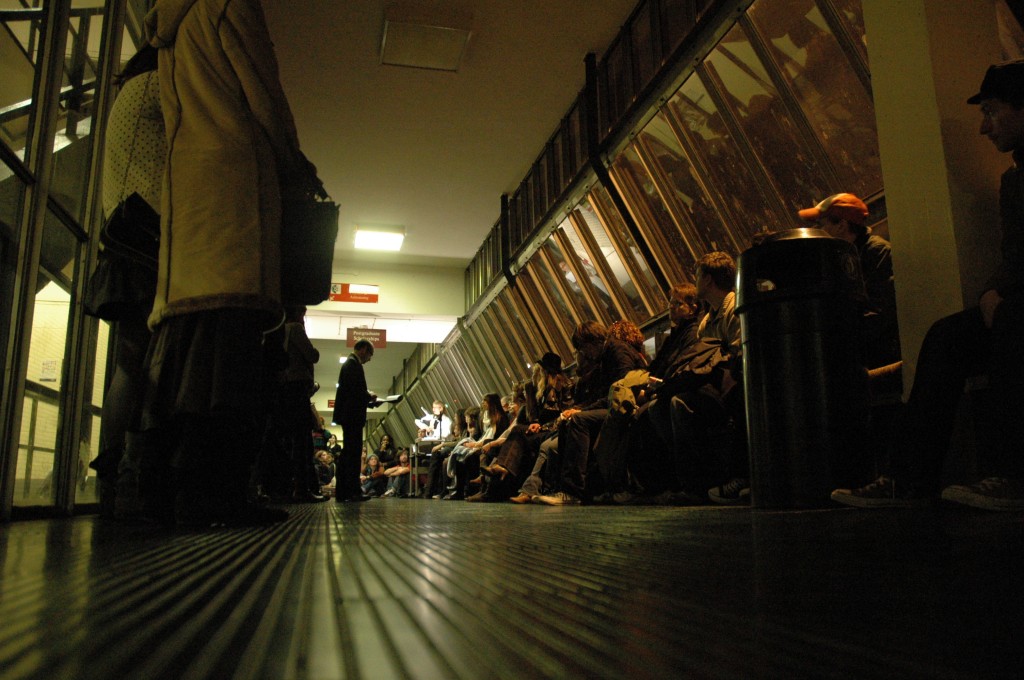 Steve and audience in the Stoner Building, with Emma Clarke on OHP

The 2011 version of the script also forms the basis of the current audio download (in which the guest voices featured are members of staff from the University’s School of English). This revised version of the text was informed by Steve’s experiences as part of the AHRC research network project “Reflecting on Environmental Change through Site-Based Performance” in 2010-11 (see the other parts of this website!). It was performed two last times, late at night, on June 29th and 30th, 2012, as part of the “Ecology” strand of that year’s PSi Conference (Performance Studies international – hosted by the University of Leeds in 2012). 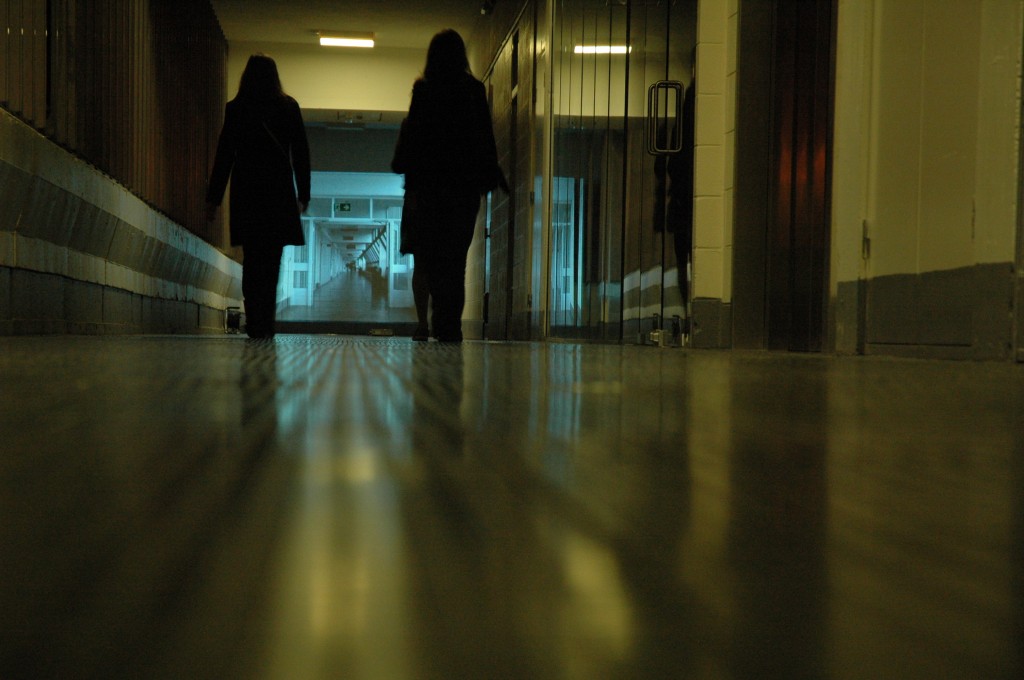 In both live versions of the piece, spectators were steadily led towards “the light at the end of the tunnel”: Claire’s video installation on the end wall of the Stoner Building.  This odd, blank wall marks the place where construction was prematurely aborted owing to funding restrictions in the late 1960s. Claire’s looping video, showing the corridor reflecting back on itself, provided a visual extension to compensate for the architect’s unfinished vision.

Since the video can play no part in the audio download version of the tour, we present it here for curiosity’s sake. Check it out in full screen mode – it’s kind of hypnotic…

Thanks for reading. Now enjoy the tour! Happy walking…