Multi-Story Water was the major, practice-as-research project to emerge from the discussions and experiments of the performance footprint network. It was directly inspired by the challenge outlined by Michael Guthrie, of the Environment Agency (EA), at the London meeting of the network (see transcription of his talk here), in which he asked whether site-specific performance might usefully be applied to raising awareness of flood risk in urban river catchments, among ‘hard-to-reach communities’ .

Michael’s provocation led to an additional, one-day meeting of some of our network members in Bristol in September 2011 (documented here), and thence to a proposal to the AHRC for follow-on funding under their ‘Care for the Future’ scheme. In 2012-13, parallel research and performance activities were pursued at two different case study sites, both recommended to us by the EA: the Eastville area of Bristol, and Shipley, to the north of Bradford. 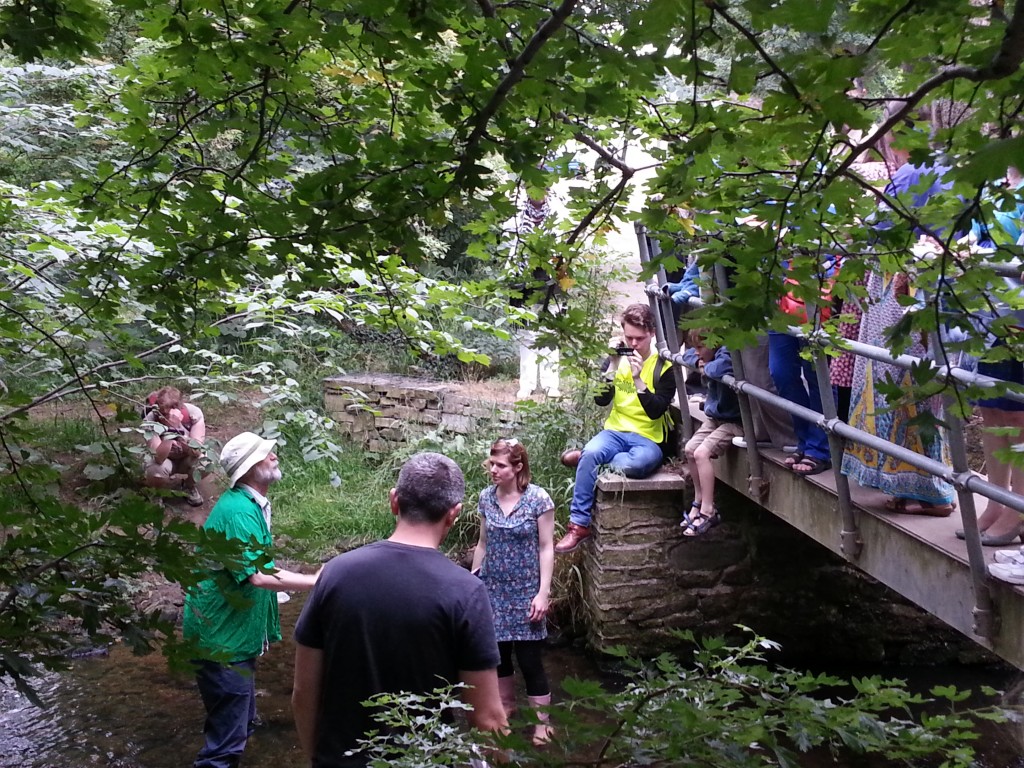 Cast and spectators at a Shipley performance of Multi-Story Water, July 2013.

The project was originally badged as “Before the Flood”, during the funding application stages. This was to make clear the key idea that we were looking at areas where vulnerability to significant flooding was not already a part of community consciousness. The project was designed as a collaboration between members of the performance footprint network and ‘Living Flood Histories’ – another network project funded under the AHRC’s ‘Researching Environmental Change’ programme in 2010-11. The Living Flood Histories network, run by Professor Lindsey McEwen (then of Gloucestershire University, now of UWE), had looked at the ways in which flood-hit communities have marked and memorialised these experiences as part of their sense of place and identity. The idea of ‘Before the Flood’ was to turn that equation around and ask how sited performance and storytelling activities might help raise awareness of local rivers and the risks they pose in advance of potential crisis, in the interests of resilience-building. (Lindsey McEwen managed the Eastville end of the project, while Steve Bottoms managed the Shipley end – though of course dialogue was maintained about both sites throughout.)

In practice, it quickly became clear that the task needed to be approached indirectly. Initial research and contact in both case study areas was carried out through door-to-door surveys, in streets where residences were flagged as ‘at risk’ on EA flood maps. It was clearly inappropriate, however, to announce ourselves on the doorstep as a project called ‘Before the Flood’ – hence the choice of Multi-Story Water as a more open-ended title. Residents were invited to share their own ideas and concerns about their areas, and memories of life living near water (the River Frome in Eastville; the River Aire – and also Bradford Beck and the Leeds-Liverpool Canal – in Shipley). Unsurprisingly, memories of the last major floods (1968 in Eastville, 2000 in Shipley) were prominent among the recollections gathered, but so too were a range of other concerns around water quality, leisure access, industrial and residential planning, etc. In practice, local residents often displayed a more active and concerned knowledge of these issues – at least as they pertained to the immediate vicinity – than did the responsible agencies concerned (including water authorities, local council representatives, and of course the EA).

We concluded, then, that our performance activities should be directed not towards any one-directional “awareness-raising” about flooding (which ran the risk of condescension), but towards representing and encouraging a multi-voiced conversation among residents and responsible agencies – focused around a shared “sense of place”, and a celebration of what local waterways mean in people’s lives. The particular aesthetic strategies for doing this varied somewhat at the two sites, depending on the skills and interests of participants.

Tellingly, during the course of the project it became apparent that the Environment Agency itself was also exploring the idea that longer-term flood resilience might best be pursued less by single-issue communications strategies than by building networks of shared interest among different groups and individuals with a stake or concern in the condition of local rivers. This “river stewardship” agenda has been pioneered, in particular, by the EA’s North of England offices. Most notably, in Sheffield, the River Stewardship Company (RSC) has been established as a social enterprise, working with and for riverside businesses and communities.  The short film below, City of Rivers, by Steve Bottoms, documents the ‘after party’ of a Think Tank event on river stewardship that was convened by the EA and RSC in Sheffield in July 2013.

The film captures a moment in a conversation… But it also emphasises a sense that the debate among agencies is currently still very much driven by operational concerns than by attempts at a wider cultural conversation with people and communities. There is much more work to be done in this direction – and one of the outcomes of the Multi-Story Water project is the development of a longer-term, larger-scale AHRC project called “Towards Hydro-Citizenship” (2014-17), in which an interdisciplinary consortium of researchers will be working with agencies and communities in four case study areas – in Bristol and Bradford again, and also in West Wales and the Lee Valley area of London – to develop dialogue, understanding, and participatory, site-specific arts activities. Watch this space!