The annual conference of PSi (Performance Studies international) set itself down in my (Steve Bottoms’s) home town of Leeds at the end of June, 2012. An indirect consequence of our 2010-11 network project (“Researching Environmental Change through Site-Based Performance”) was that the conference featured a strand of panels and presentations themed under the heading “Economy – Ecology”, which I curated in collaboration with University of Leeds colleagues at the School of Performance and Cultural Industries (who were running the conference as a whole). 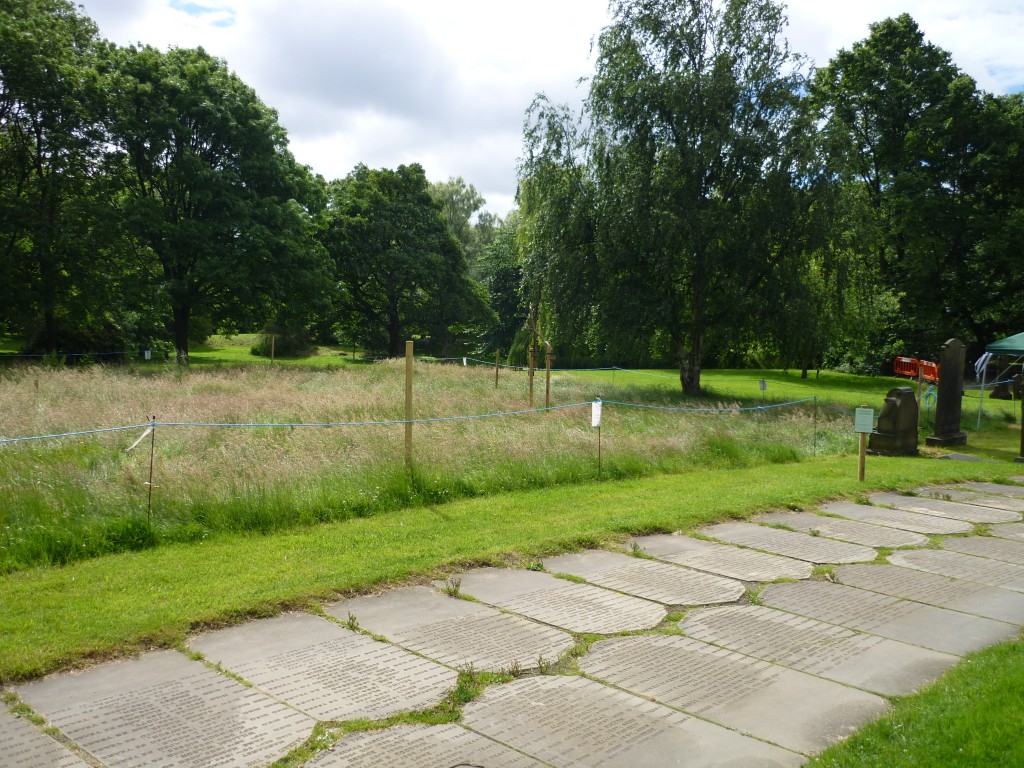 The centrepiece and highlight of the Ecology strand was Baz Kershaw‘s Meadow Meander, unexpectedly transplanted at Baz’s suggestion from its “site specific” origins in a meadow near his home in Devon. Grounds staff for St. George’s Field, the former cemetery in the heart of the Leeds University campus, had obligingly marked out a section of grass and left it unmown for three months prior to the conference… In the image above, you can see the outlines of the meadow reserve, alongside the floor-slab memorials which still function as a footpath through the Field, while reminding visitors of the site’s history of memorialisation. New life springing up – literally haywire – from a field of tombs. 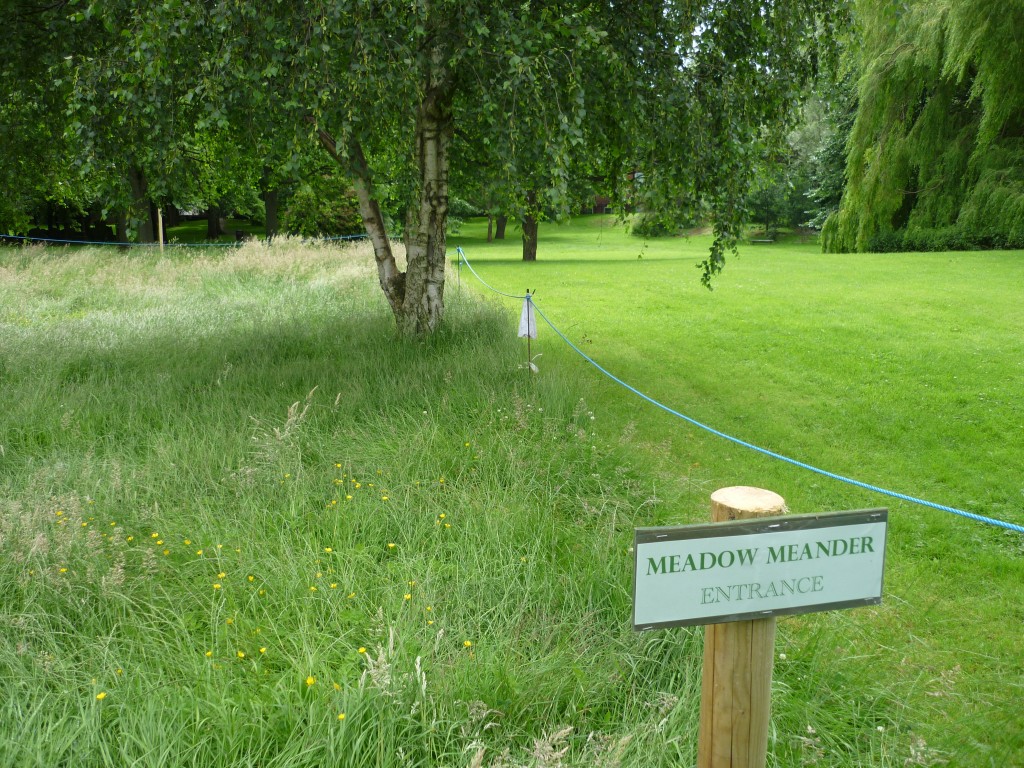 I hadn’t been able to get down to Baz’s original Devon meadow installation, but this “cover version” struck me forcibly for reasons all its own. The way in which this unruly but beautiful eruption of long grass sat juxtaposed with the rest of the Field, which was as neatly mown as ever, created (for me, at least) a powerful sense of estrangement or distanciation – Verfremdungseffekt, in the classic, Brechtian sense. We are accustomed to seeing neat, short, monocultural grass in public places and to thinking – unthinkingly – of this as the “natural” condition of grass. Yet of course it is nothing of the sort, as Baz’s intervention demonstrates… This is the natural condition of grass… 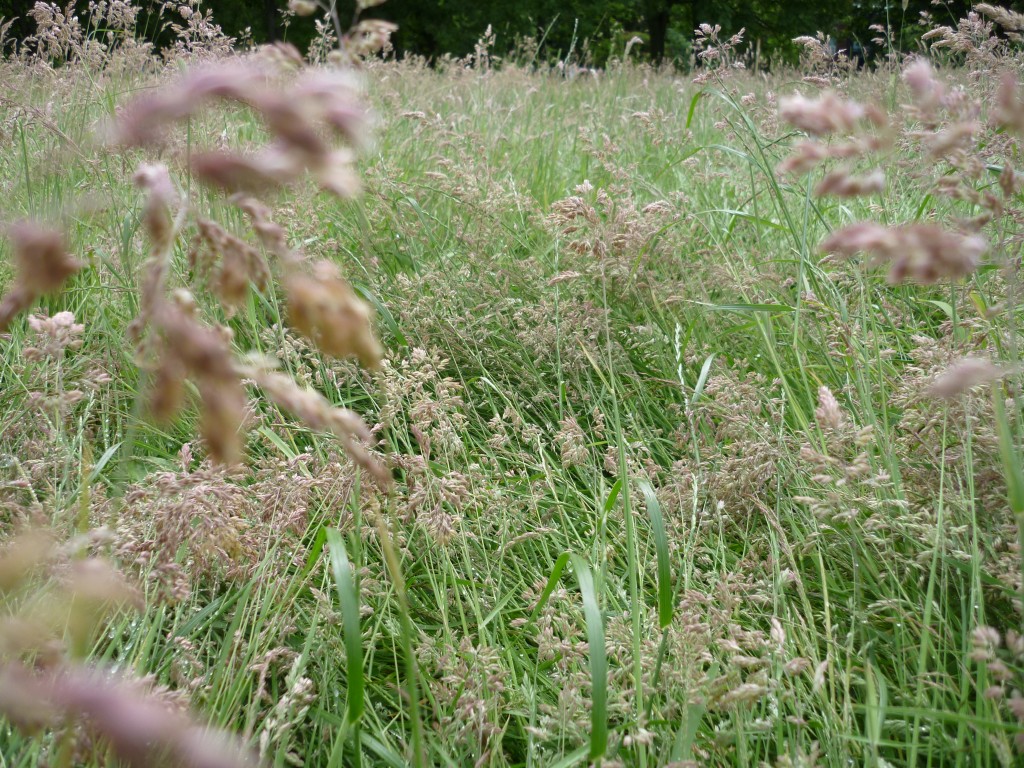 I should note, of course, that Baz is insistent that he did not intervene! That to claim this would be to give him too much (anthropocentric) agency in the field’s bounteous resurrection. He points out that he simply asked the grounds staff not to intervene, and to let nature take its course. So there’s a strange set of paradoxes here: looking at the meadow grass, it seems so much more active and alive than the inert, flat green alongside it… yet it takes the persistent activity of mowing to render the flat green so passive-looking… while it takes only human passivity to allow nature to show us its dynamism…  Passivity and, also, attentiveness — and this is really what Baz has allowed us here. By framing long grass as a work of art against uniform backdrop of short grass, we see it in a way that we probably would not if it was just, well, long grass… Nature as culture. Baz cultivating a natural absence of cultivation. 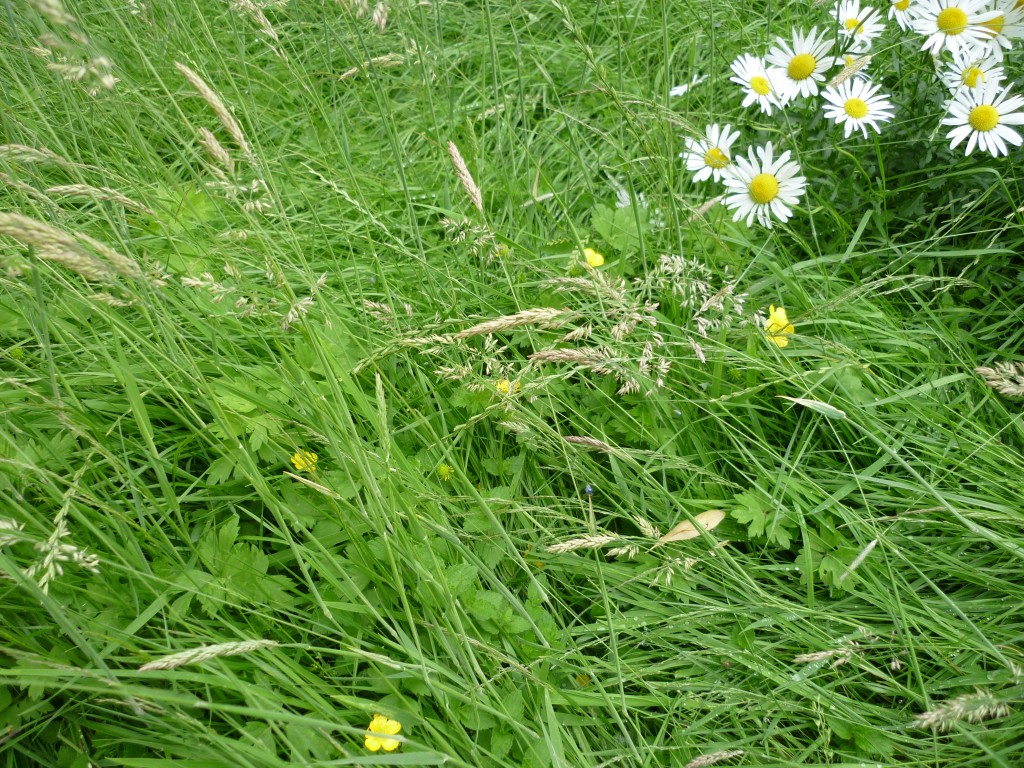 What even Baz had not anticipated, moreover (or at least, I think he told me he hadn’t…), was the sheer variety of nature that would start to run gorgeous riot once the despotic rule of  monoculture was temporarily lifted. Lurking beneath the soil, even after who-knows-how-many years of regular mowing, was the latent potential for multiple varieties of grass and clover, daisies and buttercups, and indeed other wild flowers. I’m no botanist and I didn’t spot (or photograph) them, but Baz told me that one of the University’s Botany staff did tour the installation and spotted some genuinely rare plant varieties… that had all just been waiting in the soil, for half a chance to grow… Half a chance to perform! 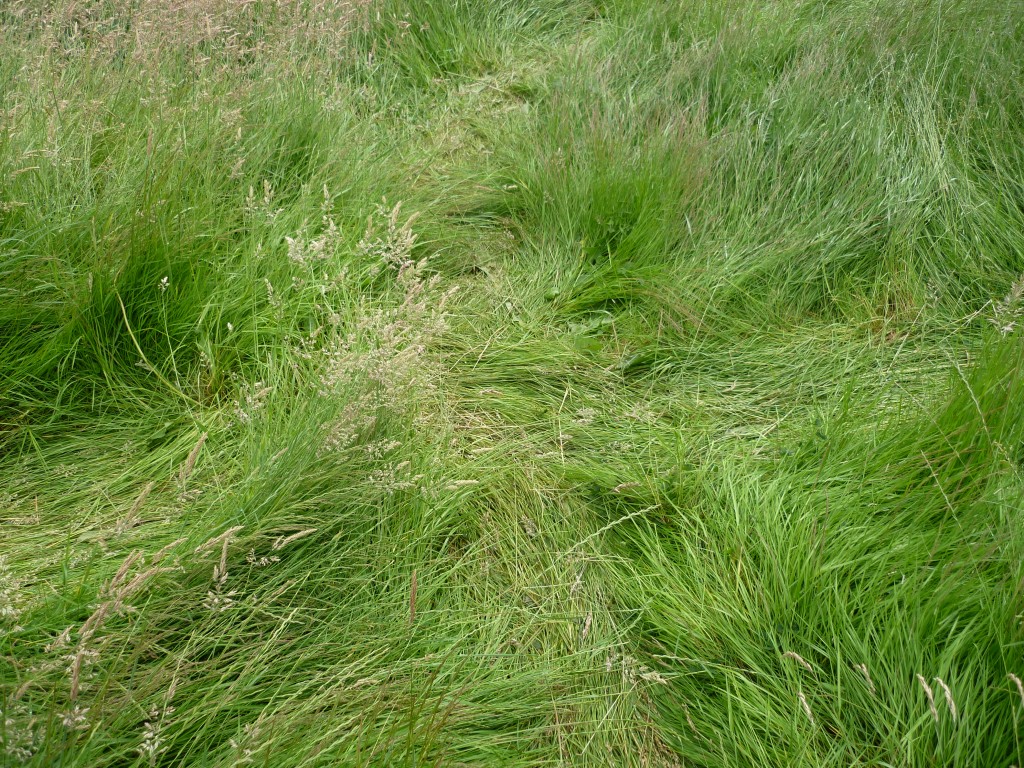 Lest I start sounding as if all human activity is a bad thing, however (?!), I should point out that Baz’s original concept for his meadow meander was all about human presence… all about the curation of a winding, looping path through the meadow grasses, which we have the opportunity to walk, run, or skip through… When I walked the meander on the first day Baz opened it to participants (performers?), the grasses had barely begun to be walked on… Following the ‘nap’ that Baz had prepared was like walking along the path of some recent, particularly circuitous gust of wind, that had blown the grass away from me at a slight, but nonetheless forceful angle… Walking with the ‘grain’ of this almost-path felt uncannily like being pulled along by some current that was dragging me with it… Indeed I had to physically force myself to stop walking (as if resisting the flow) in order to stop and look around, take in the scene from head height, rather than finding my gaze pulled inexorably along at ground level by the grass… 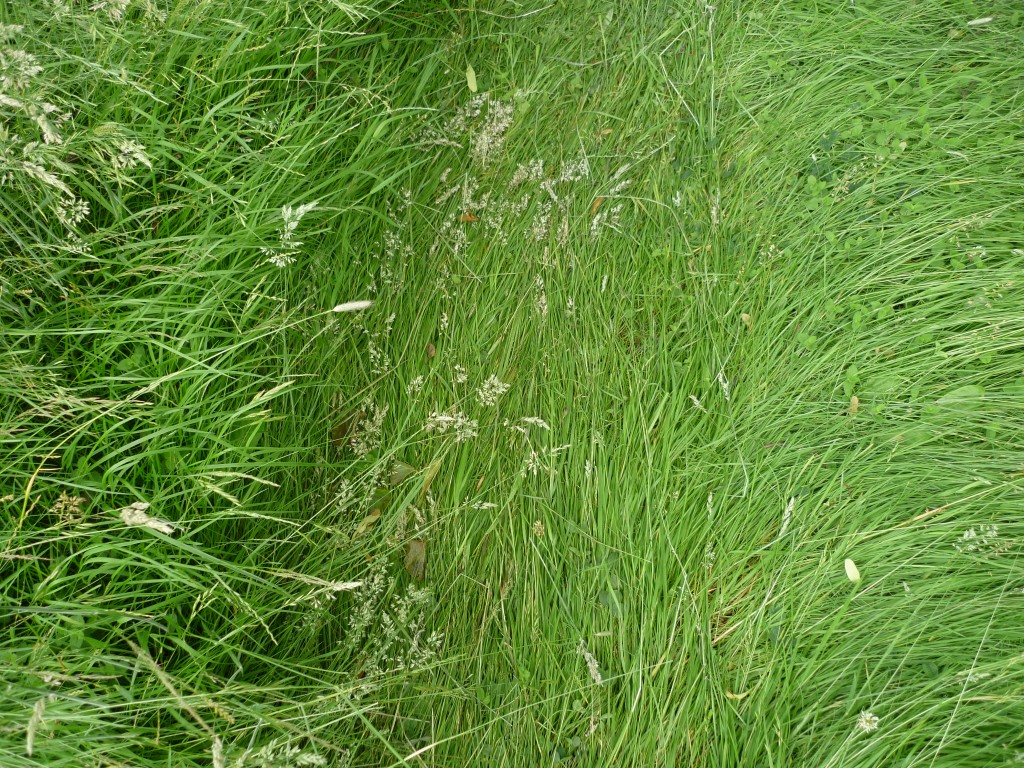 These shots, taken on the last day of the conference and installation (Sunday 1 July), don’t do justice to that first-day experience I’m trying to describe, because by this point the path had been thoroughly trampled down by hundreds of conference-attending feet. By now there was something slightly worn and forlorn about the meander, something beaten (down). This was in powerful contrast to that initial experience of the grasses as an uncanny force that held me in a strange, current-like grip. Of course, this was just my experience, but many others – similar and different – were recorded by other visitors in Baz’s response book (and in drawings, audio recordings, etc.). 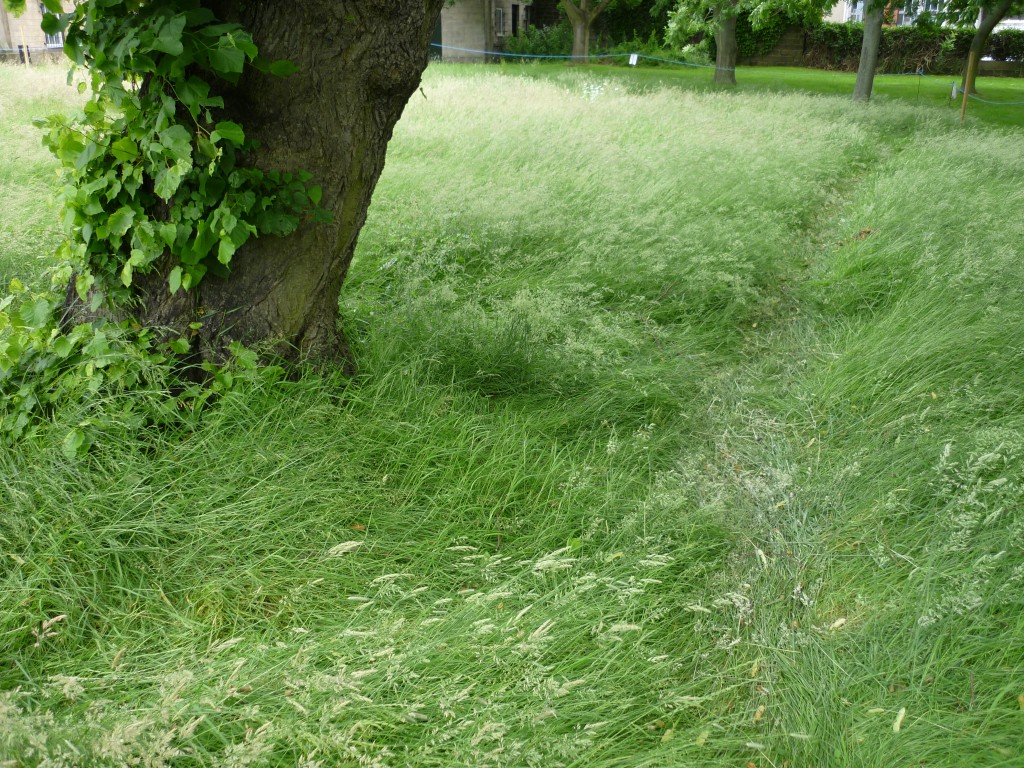 I should note here that Baz’s own initial concept for the meander was to take an existing meadow (the one in Devon), a specific “local” site, and to carve into it a path, or pattern, that echoed a specific “global” phenomenon — a vast, natural, awe-inspiring phenomenon, well beyond any possibility of human control, but which is nevertheless starting to be impacted upon by human-driven instabilities in the climate. I won’t say exactly what the pattern represents, though, because Baz prefers that it not be explained in print… so as to preserve the mysterious, experiential quality of the meander itself. And on reflection, I think he’s quite right about this: to “name” the phenomenon which the path mimetically echoes would be to reduce both to the level of human comprehension. Whereas by leaving the path unexplained (even while hinting that there is an explanation), he draws attention to the fact of an outside — something beyond our ken. All the more paradoxical, when this experience of the outside lies inside a rope fence. 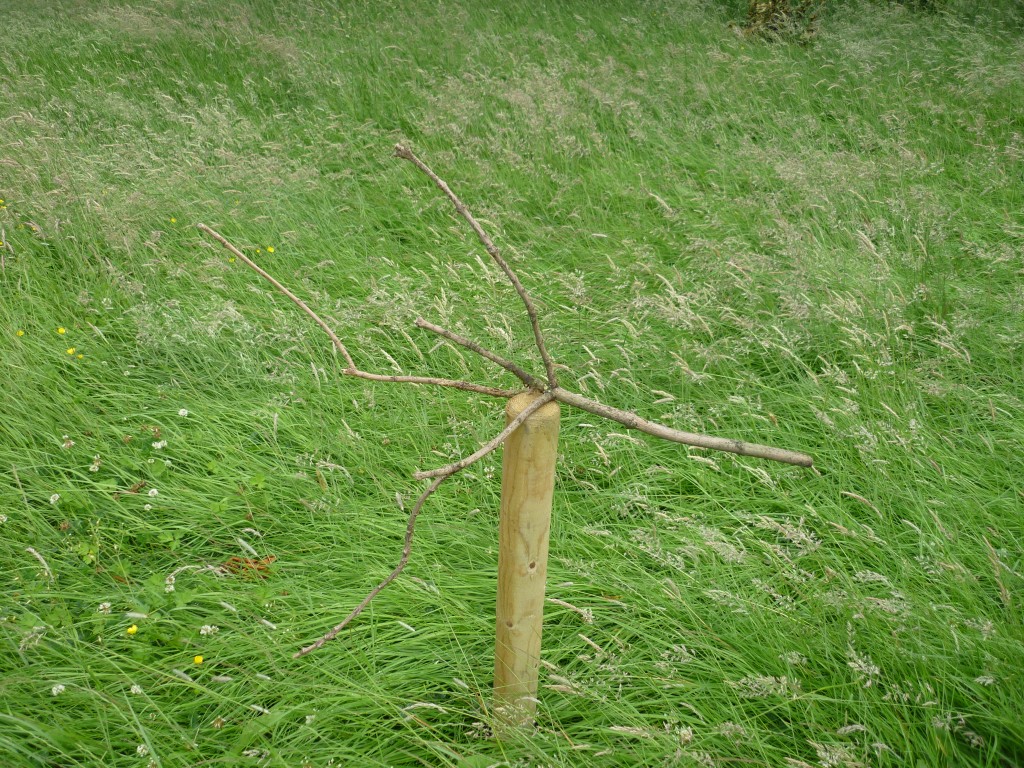 I mentioned that on my first visit to the meander, my sensory experience seemed to be rooted at ground level — caught and pulled by the grass. On my return, with the path beaten down, my experience was more at head height – the standard human perspective – but this did have its own compensations. I found it much easier, on this revisit, to simply stop myself from the onward walk and stand still, look around, listen, be here now. And in the centre of the meander was this post, on which someone had balanced a crooked twig or branch (the first descriptor is inadequate; the latter too grandiose… so what is it?). Despite persistent, gusting wind, this displaced piece of tree simply remained there, perfectly balanced, resilient to the climatic forces around it.

Perhaps, I decided, I need to be more twig.

So thanks Baz, for a singular experience. (Well, two of them…) 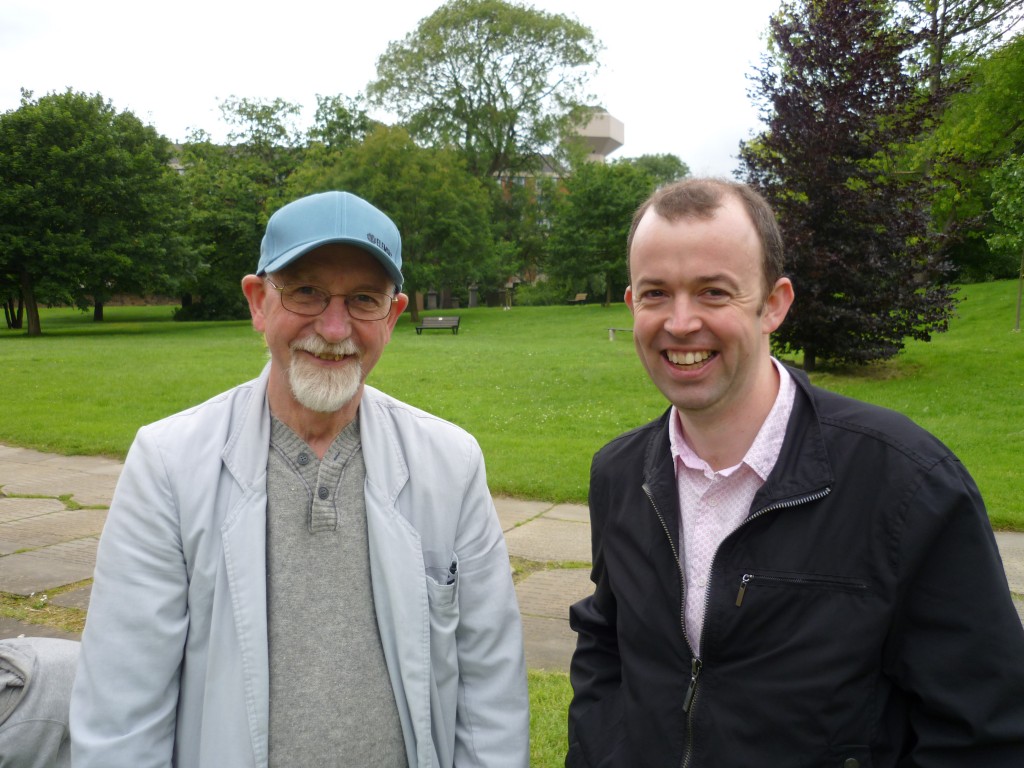 And here is the man himself, snapped that Sunday morning, along with lots of grave slabs and Simon Parry of Manchester University. Simon had literally just become a colleague of mine that morning. 1 July 2013 marked my first day of employment at Manchester. The meadow meander was a perfect way to say goodbye to the University of Leeds.