My performance response to the Cove Park site attempted to reflect on the relationship between the residential pod spaces and the path one traverse to get to them. The pods, standing on the edge of reflecting pools, are white-walled like galleries on the inside, with picture plane windows looking out on, but also sealing the observer off from, the landscape of loch and mountains. 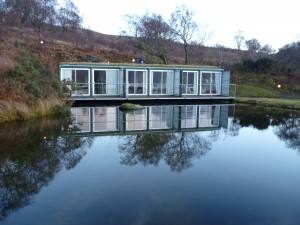 I was in the pod on the far right of this strip. ‘Room A.’

Cove Park artist’s retreat thus locates its visitors in a recognisable ‘art world’ context. Yet to get to the pods, one needs to navigate a downhill path that crosses an A-frame bridge across a gushing waterfall and the marshy delta below it, where numerous small, mountain streams converge. 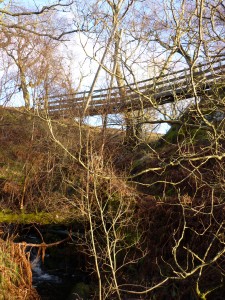 In rainy conditions, which we experienced that weekend, the ground is spongy, and the bridge slippery. The careful physical negotiation needed to get to the pods struck me as contrasting markedly with one’s visual separation from the landscape, once inside them.

Meet the group on the grassy area next to my pod, Room A. Explain that I would like to welcome them into my room – lead them to the door, unlock it, usher them in. The group crowds the room out, but attempt to look out of the window at the view. On the square, white table is a copy of Brian O’Doherty’s square, off-white book, Inside the White Cube. Standing behind the group, I read the following annotated extracts from the book, as they look out of the window:

“… The Eye is the only inhabitant of the sanitized gallery installation shot… One of the icons of our visual culture: the installation shot, sans figures. Here at last the spectator, oneself, is eliminated. You are there without being there — one of the major services provided for art by its old antagonist, photography…   It is easy for a writer to have a Spectator around – there is something of the eternal footman about him. It is more difficult to have an Eye, although no writer should be without one. The Eye is an oversensitive acquaintance with whom one must stay on good terms…. ‘The eye discriminates between…’; ‘The eye resolves…’; ‘The eye takes in, weighs, balances, discerns, perceives.’ … It has trouble with content, which is the last thing the Eye wants to see… The picture plane, like an exclusive country club, keeps reality out and for good reason. Reality does not conform to the rules of etiquette, subscribe to exclusive values, or wear a tie… The art of the Eye is brought to bear almost exclusively on that which preserves the picture plane.”

I then usher the group out of the room, lock it again, and lead them up the adjacent path towards the bridge.

I ask them to stand along the length of the bridge, looking down into the ravine area below. The waterfall is gushing loudly with all the overnight rain so I have to shout to make myself heard. I stand at the end of the bridge and read the following extract of text pirated from an internet source (www.mygarden.co.uk):

“Now that you have a pond, you decide that it needs a waterfall / water course, but how do you build one? Basically you have two choices for material. Either you can buy pre-formed waterfall sections or you can build one yourself from a liner. If you are using a liner then we suggest that it is built like a shallow letter ‘u’ but the top of each side leans outward slightly. This is so that no water can “escape.” you should also install the liner using the same method as if it were a pond. Click here to see how to install a pond liner… The hardest parts of a waterfall to build is the top and bottom. The bottom needs to overlap your pool slightly in order for the water to be able to fall. The top can either be a “header pool” (small reservoir) or just an outlet from your pump. You should either put a stone in front of your outlet pipe or submerge it so that it can not be seen…. The decoration we leave up to you but it is best to use the same type pf material that you have used to edge your pond. If you decorate you waterfall with small rocks and you find the water is going under them rather than over this could be due to one of several reasons. The rocks are too far apart, enabling the water to find an easier route, your water flow could be too weak, your rock has an uneven surface and does not sit flat, to overcome this you can cement the underside down, but if you do let it thoroughly dry out first, a better idea would be to use silicone sealant to “glue” the rocks in place.”

Turning the page of my notebook, I hand it to the nearest spectator. The new page shows a sketched map showing how the converging streams below the waterfall are diverted to serve the mirror pool in front of the pods: 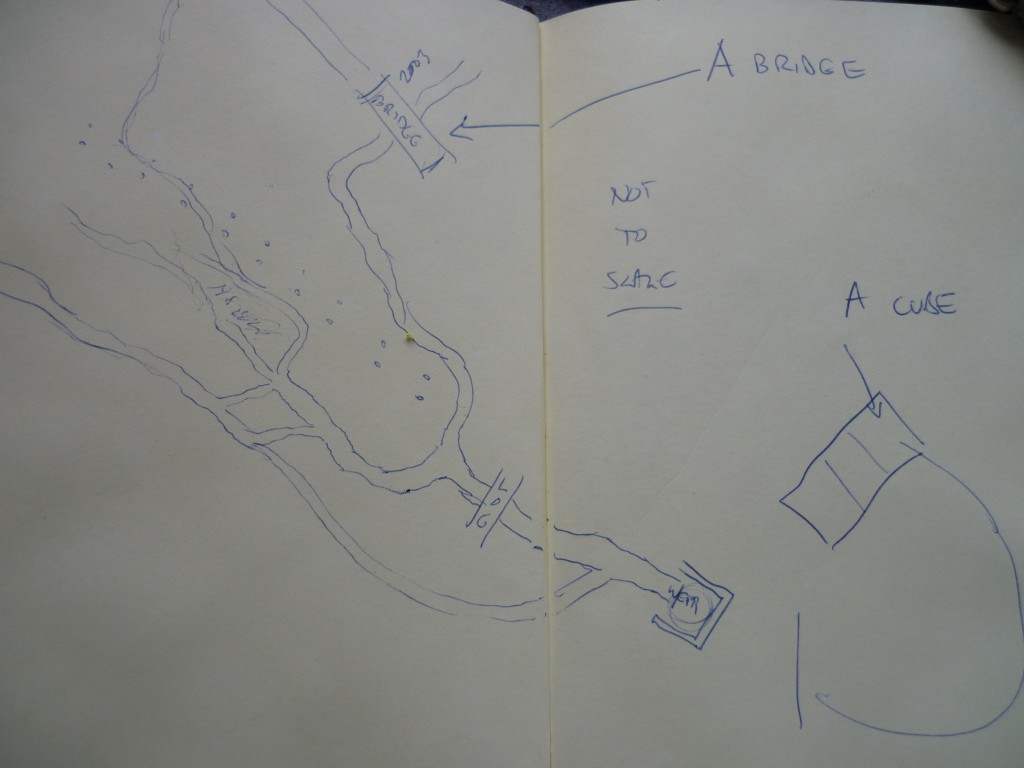 As the notebook is handed around, I step off the path and begin scrambling my way down the ravine. I fight my way across the main path of the waterfall while clinging onto bushes. I shout “1”, and then continue to shout “2, 3, 4…” as I negotiate a pre-arranged sequence of nine crossings, back and forth across the multiple streams below the bridge. From the bridge I can be only intermittently heard above the sound of rushing water; and at times I am unseen behind trees and foliage. 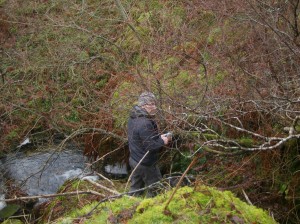 Eventually I manage to make my way back up the other side of the ravine. Just before stepping back onto the gravel path, I notice a network of rainwater rivulets cutting into and through the path – just as the streams below are carving their way down the hillside. It hits me that the strip of land we are standing on, the Rosneath Peninsula, has also been carved out over time by the movement of water from above and around.  As I point out these tiny rivulets to my colleagues, I feel – at once – very big and very small.