This last weekend (December 6th and 7th), I was invited to another “environmental arts” symposium, this time in Cardiff… Where November’s event at Central School of Speech and Drama, in London, had crammed a huge (slightly exhausting) amount into one day (see November blog posts), the “Environmental Futures” dialogue/network event  was sort of the opposite… Spread over two days, there was actually very little formal symposi-fying, in terms of prepared papers etc. In fact, there were no ‘papers’ as such at all (!), which might be regarded as a mercy… The emphasis instead was on a more leisurely pace of debate, with roundtable-type sessions featuring invited participants: e.g. I was on one where the eight contributors all spoke for 3 or 4 minutes in response to a pre-circulated document (the lone female contributor in this session was the ubiquitous – and always worth listening to – Wallace Heim). Other sessions involving facilitated conversation among all the attendees around, well, round tables…

The idea was to facilitate cross-disciplinary dialogue between researchers and practitioners in both the arts and social sciences, and this was achieved up to a point. Still, personally I would have liked to hear from some of the social scientists who were present in a somewhat more structured, sustained way, in order to feel like I’d learned something from them. The problem with open discussion when you don’t share a clear sense of an agreed knowledge base can be that you end up engaging less in dialogue than in a series of intercut monologues (including my own, no doubt)… There was a slight sense of mutual incomprehension between people coming from very different contexts, as well as moments of unexpected understanding.

The highlights of the event were definitely the presentations by the various invited artists. David Harradine, artistic director of Fevered Sleep (and previously a participant in our performance footprint network event in Scotland back in 2011 – see February 2011 blog posts and the ‘David Harradine’ page under ‘Glascove’ in the ‘Documents’ section of this site), presented and talked about his short film It’s the Skin You’re Living In, which you can view here. 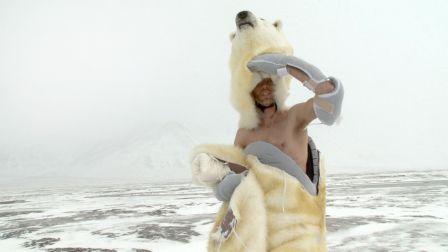 This rather wonderful little film, which playfully “brings home” the rather distanced, cliched climate change imagery of stranded polar bears, prompted much discussion. So too did the outdoor Tumbleweed performances by solo artist Claire Blundell Jones (with whom I collaborated on the original, live version of our Red Route corridor performance in Leeds back in 2008 — see under the “Projects” tab on this site). Claire had been invited to revive her signature Tumbleweed piece, last performed 3 years ago, by symposium co-organiser Simon Whitehead (a wonderful artist in his own right, of course), and she could be seen out and about in Cardiff twice on Friday, blowing her lonely tumbleweed along in a laconic presentation of futile, lonely, urban busy-ness — readable on all sorts of levels.

I was invited by symposium co-organiser Carl Lavery to provide an overnight response to David and Claire’s pieces. The result was the following text piece which I presented first thing on the Saturday morning (it also includes an oblique nod to Stefhan Caddick‘s lecture-demo about some of his site-specific environmental sculptures – I was particularly struck by his water-powered light sculpture inspired by the Sex Pistols’ “No Future” anthem from God Save the Queen). My delivery of the text was greeted very positively by those present (more so than I’d expected, to be honest), so here it is for the record…

It makes more sense, of course, if you’ve viewed David’s film… Or indeed if you’ve ever slept in a hotel like the one we stayed in on the Friday night…

Listening to the whirring and throbbing of the building’s innards

A shield against atmospheric unpredictability

What was ever wrong with just opening a window?

Unless I go around individually turning off the wall lamps

Shafts of golden warmth spilling out beneath its doors,

Thus killing all electrics in the room

And I’m thinking about that stark, white landscape in David’s film

But also about the warmth of that golden light that, elsewhere in the film,

Spills across the exposed chest of the bear-man-man-bear

Ruthlessly exposed by that

Posing for the camera, centre stage

How did he get the bear to oblige?

Oh, I see, not bear but man

Held away from the body by foam padding and straps

The words ‘Left’ and ‘Right’ scrawled on opposing arm sections

of a kind of satire

It’s this skin we’re living in

A mountain, cleft in two by vertical dividing line

A phrase I heard the other day for the first time

Befittingly literal description for this bear-man-man-bear

In the illustrating photograph

A group of semi-naked dancers are huddled together

Dribbling on the floor

Just beyond the dancers

An unexplained pool of liquid which I can only assume

The revenge of nature on art.

Is walking across the descending side of a curved pedestrian bridge

Beneath the soft, white feet of the laughable bear suit

The bare feet of the dancer

To this world we built for ourselves

Battles to propel an invasive tumbleweed

With a petrol driven leaf blower

Across an indifferent urban landscape

That we tolerate, enjoy, condone

In our various metal exoskeletons

Out of the fridge

This entry was posted in Uncategorized. Bookmark the permalink.