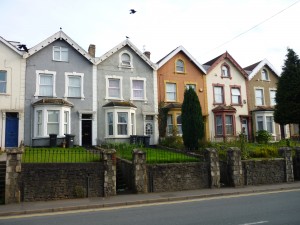 Not particularly at risk: homes in Eastville

On Friday 16th September, seven members of the performance footprint network group (about half of us) reconvened in Bristol for a one-day workshop, using up a bit of the left-over grant funding… The idea was to follow the provocation that Michael Guthrie had given us on the last afternoon of our London meeting. As Community and Stakeholder Relations Manager for the Environment Agency, he had asked us to think about how the network’s deliberations on site and environment might be applied to making work targeted at particular communities at risk from flooding. The Bristol meeting (the EA are based there, nationally) was thus an opportunity to scope out a particular site, recommended to us by the EA, with a view to (possibly) applying for further funding to make something in that location or a site like it… The selection criteria were that the area/community be typical of those the EA often has difficulty in communicating flood-risk information to: urban areas, where the people are perhaps somewhat more disconnected from the ‘natural’ environment than those in more rural areas, and where there is little to no living memory of previous flooding in the area (flood histories often being the key drivers in present action towards future resilience measures).

Eastville was the area chosen for us by the EA – but we had little idea of what to expect when we got there. We knew that we were looking at the River Frome, and that the EA’s Flood Management Plan had identified quite a narrow stretch of land in Eastville as being at risk. So the afternoon before the official meeting, five of us – Phil, Wallace, Paula, Alison and myself – set off on a kind of blind reconnaisance mission, as ignorant tourists trying to assess the lie of the land (and the water). In my mind, I think, I was expecting to find some typical Bristol homes like the ones pictured above – except that these ones are some way uphill from the river (and their doors further uphill from the road). It turned out that what we were really looking at was this: 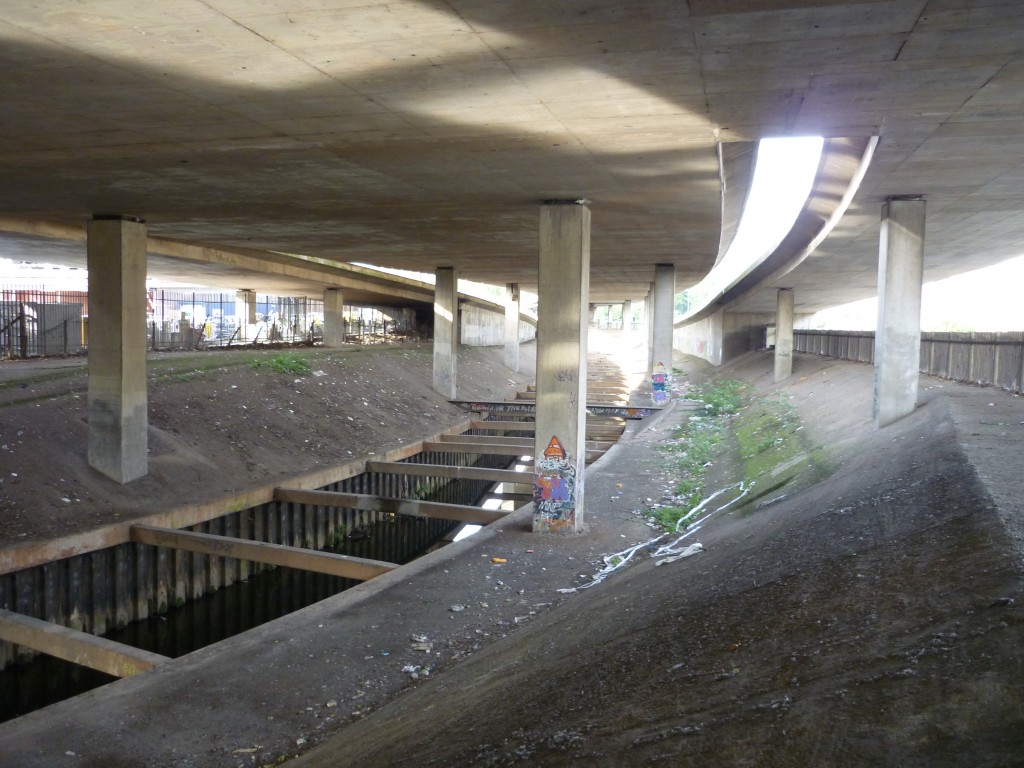 The River Frome, canalised with concrete and sheet piling, in near-stagnant slow-flow, directly underneath the monumental curve (and considerably faster flow) of the M32 motorway. Very little ‘natural’ about this particular environment, and hardly surprising if people living in the area feel a ‘disconnect’ from the river, given that it is fenced off like this: 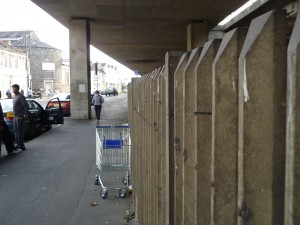 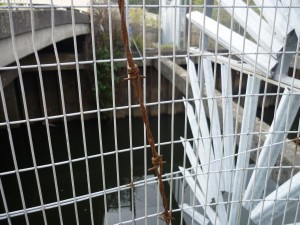 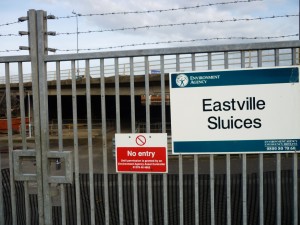 This last image shows the heavily protected entrance to the Environment Agency’s sluice gates, just downstream of the motorway under-flow section. And it is for the run-up to the sluices that the river is so heavily canalised. It’s here that the Frome goes underground, entering the culverts that lead it into central Bristol and its intersection with the Floating Harbour section of the River Avon. It’s also here (we learned the next day) that a five-mile long interceptor tunnel begins… a huge metal pipe designed as an overflow outlet when the river is in flood, which takes excess water rushing straight off to the Avon Gorge and bypassing the city entirely. So the city itself is relatively safe from the risk of the Frome flooding, but the Eastville area – the run-up to the sluices – is not.

So who exactly is at risk? Well, most obviously, this stretch of homes backing onto the river directly in between the motorway under-flow and the sluices: 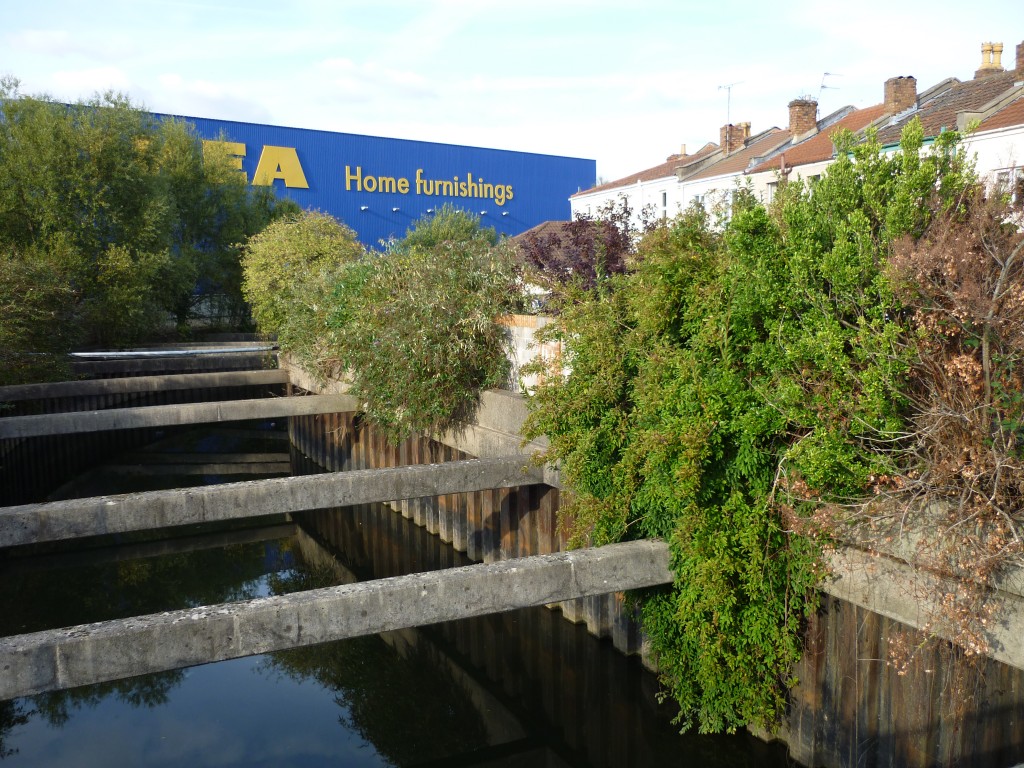 You’ll notice in this image how these homes have masked themselves off from this frankly not-very-attractive stretch of water with bushes and trees and the ends of their small gardens. You’ll also, no doubt, have noticed IKEA. The other side of the river is dominated by a retail park that includes the Swedish giant and a Tesco superstore, and then acres of car parking in the flood plain itself… and also a city of Bristol glass recycling depot. So to be fair, the planners seem to have fairly thoroughly removed at-risk housing from the area (in the interests of disposable retail sheds?), leaving this one truncated street to its own devices. On one side of them, the river, on the other, the motorway – with concrete pillars generously painted in pastel colours to make this concrete wasteland look like more of a social area… (which apparently it is, for the homeless…) 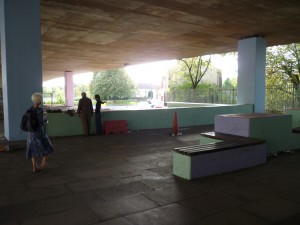 And then, just on the other side of the motorway, you reach some more in the way of joined-up housing… which, to judge from ‘Bangladesh House’ and the flood-plain mosque, is home (in particular) to a Bangladeshi community – whom I imagine have very particular cultural associations of their own with the idea of flood risk. 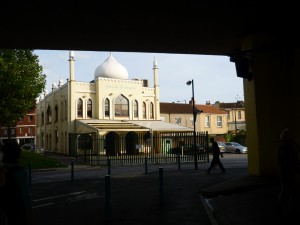 Here we’re seeing the mosque from underneath the motorway… Our reccy next took us to the right, along the road in the foreground of this picture. Here the signs of Bristol’s famous streetwise creativity became evident in patches of guerilla gardening… 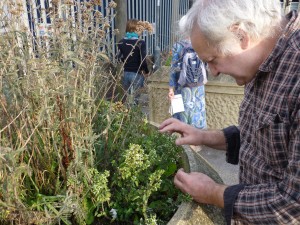 … and in the (not terribly inspired) graffiti along “Frome Lane”, part of a footpath that tracks at ground level, as closely as it can, the underground journey of the Frome  once it has gone into its culvert: 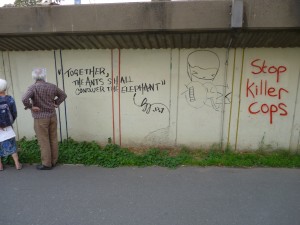 I have to confess that as we headed back to our hotel that evening, following our Eastville derive, I felt inexplicably depressed. Maybe it just felt like a bit of a bad joke – having been sent by the EA to a rather grim patch of Bristol which they themselves had been instrumental in making grim. After all, one of the functions of the sluice gates is to collect and skim off rubbish from the river, before it goes underground: 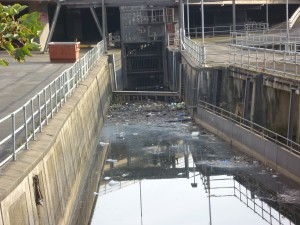 Yet given this open display of urban ugliness, its hardly surprising that the river section underneath the motorway also gets clogged up with trash – as if this is a general, neglected, dumping ground for whatever… an old mattress in this instance… 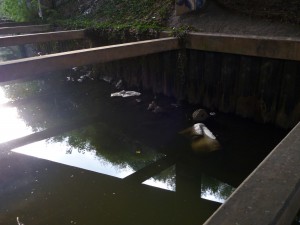 So yes, I was pretty depressed by the scene… And yet also curiously attracted to it – to the sweeping monumentality of the motorway architecture, for one thing (which more than one of us connected back to Fountains Abbey, and its own canalisation of the River Skell), and to the jumbled, disjointed nature of the housing and retail landscape. Like a set of historical contradictions waiting to be unravelled and explored.

I think the x-factor that made all of us that much more enthusiastic about the site, though, the next morning, was Melvin Wood. Melvin is one of the EA’s technical specialists, invited by Michael Guthrie to speak to us because of his knowledge of the Eastville sluices and the hard engineering in that area For one thing, Melvin explained the interceptor system to us, and helped us understand just how necessary the river’s canalisation is, prior to going underground at the sluices (this was a point also corroborated by Jeff Neal, one of J.D. Dewsbury’s hydrologist colleagues at Bristol University’s Geographical Sciences department). More than that, though, Melvin has an infectious enthusiasm for the concrete engineering itself – explaining, for example, the structural reasons for the cross-struts supporting the sheet-piled riverbanks. He very much confirmed our paradoxical sense that there is a beauty, as well as ugliness, in this artificial landscape. Baz Kershaw later memorably summed the location up as “richly desperate.” 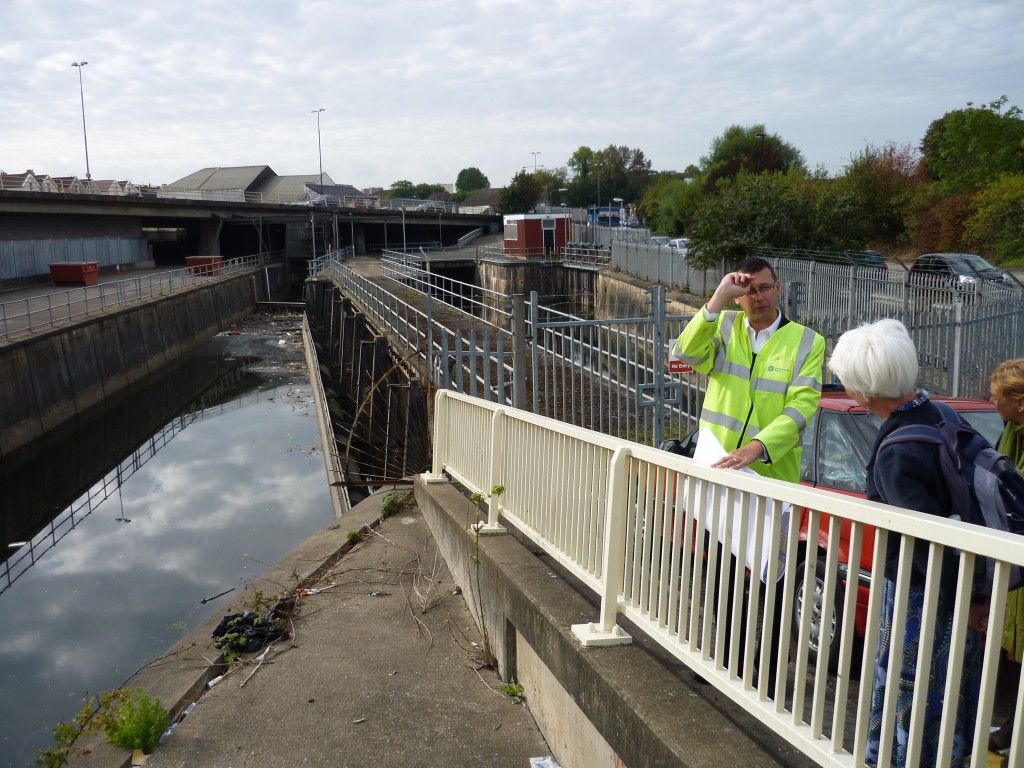 Another key element in our re-visit to the site on the Friday (when Baz and Helen Nicholson rejoined the five pre-visitors – along with Melvin, Michael, and their colleague Louise from the EA, and our other guests Jeff Neal, Alison Crowther from Streets Alive, and Lindsey McEwen from Gloucestershire University and the AHRC ‘Flood Histories’ network) was our accidental meeting with some older residents just upstream of Tesco’s. Here, the river is more recognisably a river – with swans a-swimming and even, we were informed (though did not see it), a local kingfisher. Here, a row of houses backs onto the river in a manner altogether more ‘at home’ with it: 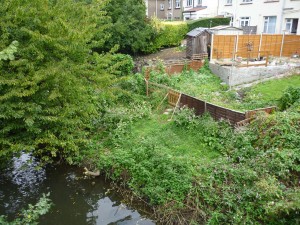 Indeed, we learned from the couple we came across (and spoke with for quite some time), the homeowners on this stretch of the river are responsible as owners for their half of the river as it passes their homes. They were very proud of this fact, and had long memories of at-times difficult relationships with the Environment Agency and other bodies, over river management issues, flood-risk designation, and so forth. They also remembered the 1968 floods – the last time the Frome seriously over-reached its banks – when the waters apparently rose higher than the level of the raised car-parking space visible to the right of the picture above. There was, in short, none of the urban disconnect with the river which we had found only yards away on the other side of the Tesco roundabout. I think many of us became intrigued with the possibility of using performance methods to engage and connect up the fragmented elements of the residential community between here and the sluices. What kind of conversation might arise around people’s associations with all that forsaken concrete, for instance? (Despite the pastoral idyll of their back gardens, the upstream residents confessed that traffic and noise pollution in the area has risen exponentially over the last few decades.)

The rest of Friday’s meeting was spent back at Bristol Uni, as guests of the Cabot Institute (the geographers’ sustainability and resilience research arm – alas, having set this link up, J.D. was unable to join us on the day because of a family situation). We had further input presentations from hydrologist Guy Schumann (showing us satellite imaging of the Eastville area), from Alison Crowther (outlining the work Streets Alive and other grassroots organisations have doing in engaging communities with issues such as flood risk, responsible transport use, etc.), and from Lindsey McEwen (outlining her own research, through her AHRC network and other initiatives, into flood memory narratives in affected communities). Helen Nicholson also provided us with some compelling thoughts around developing performance work in community contexts. All of this made for a fascinating set of interventions, and sparked much debate around the issues arising and the Eastville site itself. (Much of the discussion was recorded, and I plan to put edited transcriptions on this site in due course.)

What we collectively came to at the end of the day was a sense that Eastville would be a compelling place to work and develop engaged, site-specific performance. It’s a location that, despite the relatively small number of homes at direct risk of flooding, does seem to epitomise the problems of spatial and community fragmentation, and disconnect from the ‘environment’, which are apparent in so many other urban locations. As such, it could indeed operate as a fascinating test case or case study in developing performance methodologies that seek to involve and inspire local residents towards a renewed sense of their immediate landscape, and indeed waterscape (‘a watery sense of place’, to borrow Lindsey McEwen’s phrase). It’s likely that such renewed connectivity would be a pre-requisite in any drive to encourage practical action around flood awareness. And beyond the EA’s core concern with flood, of course, there are wider ramifications in terms of future uncertainties about climate change and the potential increased likelihood of severe weather events. Can performance offer a way to engage with future uncertainty in a playful, constructive way? (we’re back here, of course, to the core concerns of the network itself)

There are of course a huge number of ‘buts’ involved in the thought of pursuing a project in Eastville… Not least of which is the fact that so few of us are based in or near Bristol. To develop something meaningful here would take time, commitment, ingenuity, research, great connections, and people on the ground. But the possibilities are there… 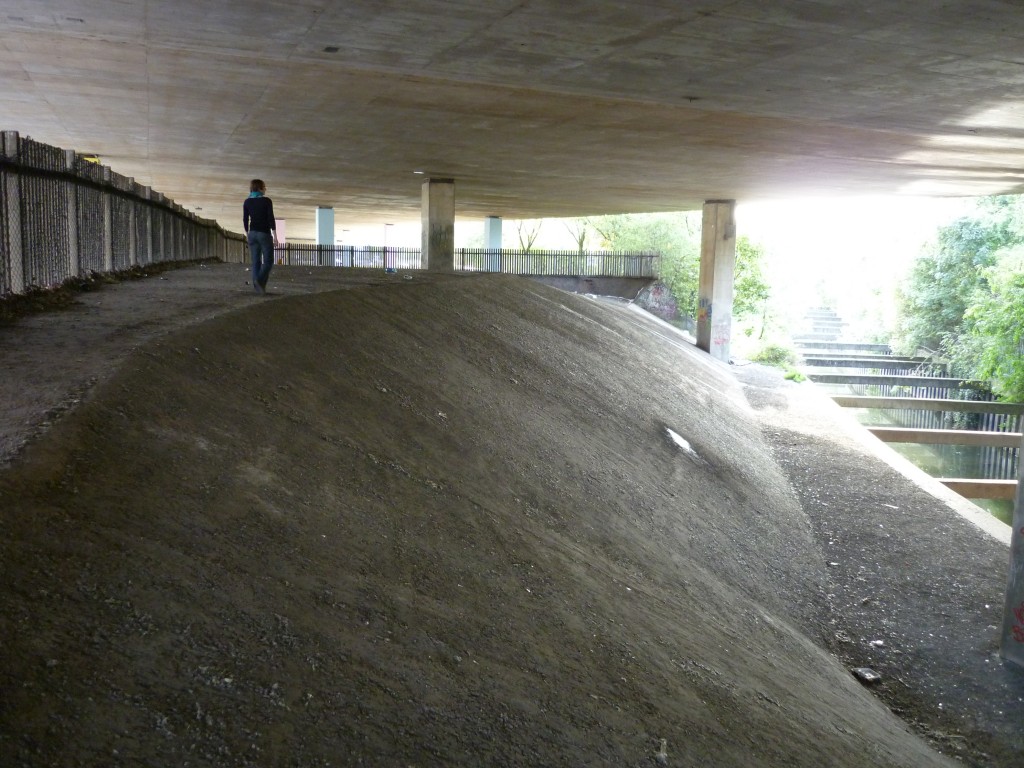 Dance for us, Paula.

This entry was posted in Eastville. Bookmark the permalink.