And while London burns…

So it’s Wednesday evening, and tomorrow I’m off to Bristol for our additional, follow-up network meeting, pursuing a potential collaboration with the Environment Agency. How might we use site/community-based performance to help highlight issues of flood risk (while also retaining an aesthetic integrity of our own) in an area that has not experienced flooding in recent memory? The EA has suggested the Bristol area of Eastville as a focus for our attentions.

No doubt I’ll be blogging about the outcomes next week, but this entry is to reflect on another element of follow-up to our London meeting in May… Last week I visited the offices of PLATFORM (who have apparently just dropped the capital letters and are now just Platform), to conduct an in-depth interview with James Marriott and Mel Evans, who presented their walk and talk to us in May. This conversation will be transcribed and either posted on this site or used in the forthcoming edition of Performance Research arising from the network project. 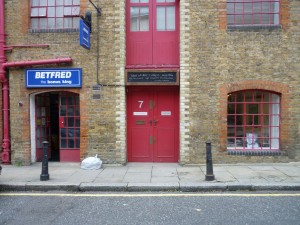 Oddly enough, it took me a while to find the offices. Platform are based, quite literally, underneath the approach to Tower Bridge – appropriately perhaps, like subversives burrowing into the foundations of the establishment… They’re just on the South side of the river, but technically still on land that’s part of the City of London, which is of course one of their main focuses of research and creative response. But their offices are so tucked away that I just couldn’t see the entrance at first despite the perfectly good directions. Apparently this is a common experience. I ended up calling Mel on her mobile, and she said she was looking right at me. I turned around and there she was, literally just across the road, standing in the doorway that I couldn’t see for looking. I suggested that they should rename themselves Platform 9 and 3/4.

Platform do make you look differently at the city, of course. Following a fascinating conversation with James and Mel, I set out to experience their 2007 audio walk and while london burns – which I’d been reading about in a couple of journal articles circulated by Helen Nicholson. Like the guided walk we experienced in May, this piece uses the City as its site and subject – and indeed covers some of the same ground that we did in May, both physically (Threadneedle Street and the 1 Poultry building) and thematically (and while london burns also focuses on BP’s influence, though it predates the Deepwater Horizon disaster). Even so, even as I felt myself criss-crossing the path we had walked collectively a few months ago, this was a very different walk and very different experience.

A large part of this difference lies in the formal distinctions between the two walks. In May, we were led on a ‘live’ guided tour by James and Mel, which observed the traditional structure for such events — walking between locations, stopping, talking, moving on. In between the presented sections of narrative, our engagement with the city streets was very much our own. By contrast, and while london burns is a continuous experience – billed as ‘operatic’ because of the interwoven musical soundtrack, but for me the analogy was more ‘cinematic’… The sounds and voices being heard only in my head as I moved through the city imposed a kind of screen or frame over what I was seeing — dramatising it and at times even melodramatising it (quite deliberately, it seems: the operatic form was chosen by Platform because of the ‘overheated’ subject matter of global warming). With instructional voices giving me particular directions to “Look up” or “Look through this window”, I felt as if my field of vision was operating as a kind of movie camera, twisting and dollying to find very particularly composed views. Early on in the piece, one is encouraged to walk around and around the circular entrance-way to the Bank tube station – an experience which, accompanied by music and apocalyptic predictions about +2 degrees global temperature rises this century – generates a sense of whirling, cinematic vertigo (until one then stops, abruptly, next to a cooling vent that blasts hellish hot air from underground up into your face… ‘stand as close as you dare’, invites the voice). Conversely, across the street from the Swiss Re building, for example (a.k.a. the Gherkin), I was encouraged to take a meditative moment of time-out, step under an unassuming copse of trees and – once again – “look up”. The sudden juxtaposition of Norman Foster’s uber-slick architecture with this simple canopy of leaves spoke volumes about the priorities of this place, the lack of green space visible elsewhere in the city… 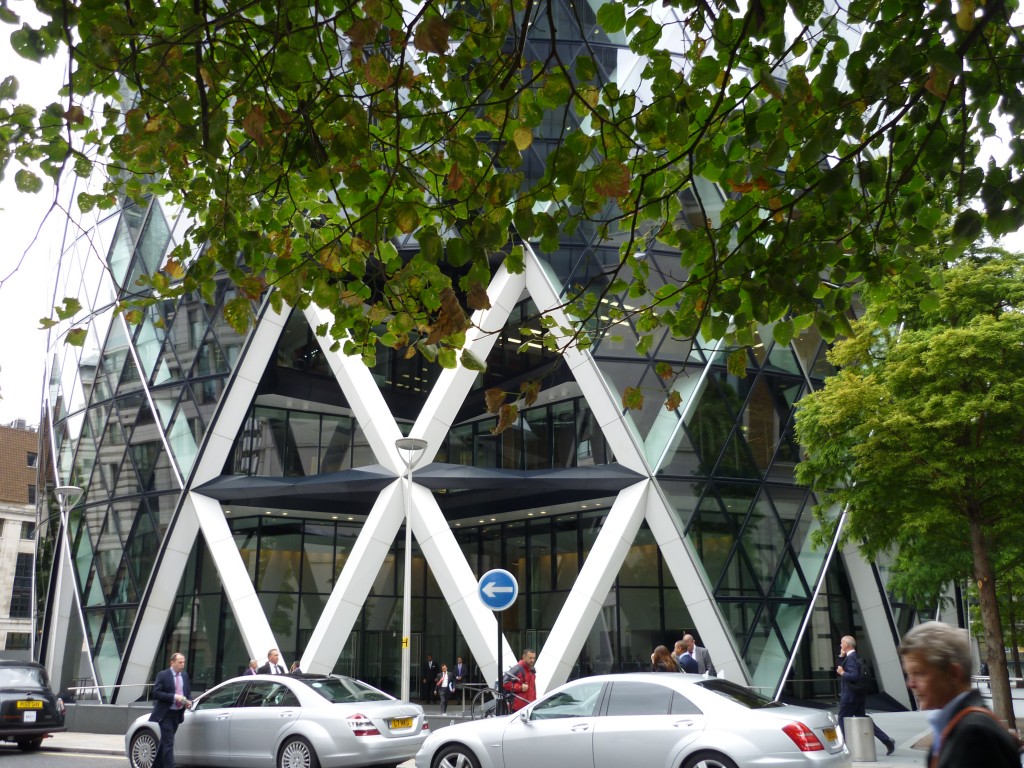 The defamiliarising effect of the internal voice/narration, layered over the city and drawing curious attention to it, operated in a very different way to the much cooler, matter-of-fact ‘art tour’ narration in May. Indeed, this form combined with the narrative’s subject matter to create a weird sense of looking at London in the past rather than the present. A disillusioned city trader speaks melancholically of anticipated disaster – part personal (his partner has left him), part economic (this 2007 piece eerily anticipates the financial crash of the following year) and part environmental (catastrophic climate change is anticipated as imminent). The effect as I listened was to create a sense of looking back at London in a period (now!) of blind and blithe confidence about its own assumed continuation … back from a desperately less optimistic future… That effect is accentuated further by the periodic references to and sights of London’s historical past – at the outset we see the remains of the Roman temple of Mithras (now preserved amidst a building site); at the climax we climb to the peak of the Monument to the Great Fire of London, down Pudding Lane… Empires have fallen here before, we are reminded; disaster has struck and wiped out the present… This present is not forever.

This is powerful stuff, and all the more so because the piece exhorts us to take action so that the disaster might NOT happen. The listener is implicated as part of this place, and I imagine that it is particularly powerful if one actually works in the City, like the narrating trader character. The ideal audience member seems to be just such a trader — and as Financial Times review coverage of the piece suggests, this is a piece that has reached at least some of the financial community. Just as the May walk found its pivotal moment when we, as (mostly) academics, were implicated in the oil narrative in being reminded that our USS pensions depend on BP stock, so and while london burns seems to hinge around the moment when, circling the base of the Gherkin, the listener is invited to look into the glass cafe windows… to see those sitting within, but also to catch one’s own reflection. 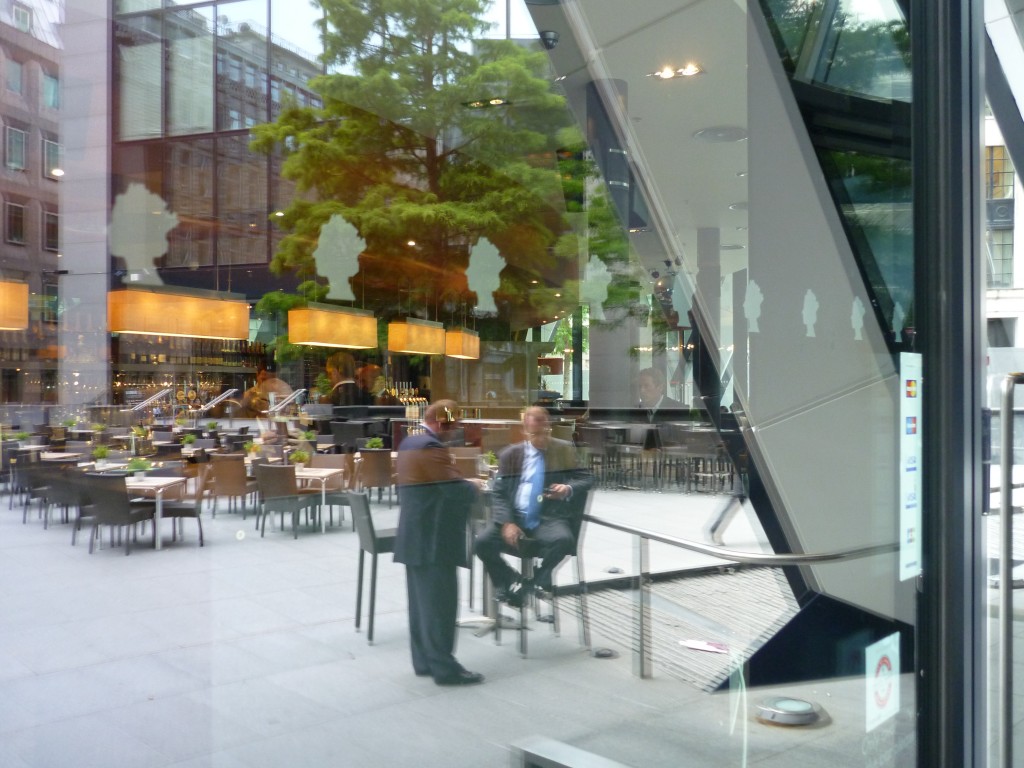 What are those people in there doing to avert disaster? And how similar are those people in there to this person uncomfortably reflected? The City of London is a pumping engine of the global capital machine, a driver of climate change. How might it reassess its priorities? Platform are interested not only in pointing fingers at others, but at asking questions of those on the inside… As James put it in our interview, their role is in part to engage bankers and businessmen in conversation… to invite them away from their circular conference tables and invite them to look out of the window at what is happening outside….

The slight problem for and while london burns is that, four years on from being uploaded to the internet, it has not quite kept up with what is happening outside… 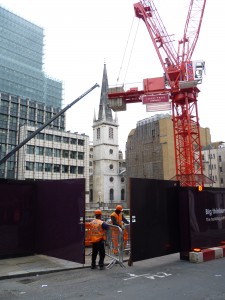 The rate of continuing change in the City, of buildings coming down and new ones going up, means that the smooth progression of Platform’s planned journey becomes – at times – entirely non-navigable. You have to abandon the printed-off map and instructions, pause the recording, and walk around whole blocks until you can get yourself back to where the piece wants you to be. That’s one problem.

The other one is our old friend apocalypse. The piece anticipates, seemingly quite confidently, that an irredeemable ‘tipping point’ towards runaway global warming will occur at some time in the next five years. But counting forward from 2007, that window will expire very soon, and there’s no irrefutable signs just yet of catastrophe. (Nor should we want there to be!) There’s a danger, as network discussions have reflected on in the past, that very urgent and serious concerns about climate change can be undermined by the tendency to warn darkly of things that don’t then happen on schedule. Of course, it may well be that we have passed a tipping point, and we just can’t quite see the effects yet (cheery thought). But equally, there might be reason, sometimes, to revise down the apocalyptic predictions. and while london burns reaches its conclusion as we step downhill towards the river, and are invited to imagine the floodwaters from the Thames rising around us (before climbing the Monument to reach virtual safety). The estimates for the flood line are based on Environment Agency estimates, the narration tells us. But if I recall correctly what our EA friend Michael Guthrie told me recently, the EA reappraised its expectations for the Thames Barrier only a year or two ago, and they are confident that it will actually survive for longer, and hold back more water, than previously estimated. If London is at threat from flooding, Michael suggested, it will be more because of groundwater (the underground tributary rivers coming up into the streets) than because the Thames bursts its banks. But that is not the narrative that and while london burns confidently informs us of… And that contradiction might allow sceptics to write the piece off as hysterical nonsense, when in fact its fundamental concerns are as pressing as they ever were. It IS a dangerous, suicidal nonsense for some in the City to be driving global emissions while others are charged with preparing to mop up the mess. The question is how to reflect on this contradiction, and encourage action on it, without falling into the trap of romanticised doom-mongering… a danger that this piece does flirt with it at times, for all its evident strengths and continuing relevance.

All of which brings us back to the Environment Agency, and flood threat, and Friday. 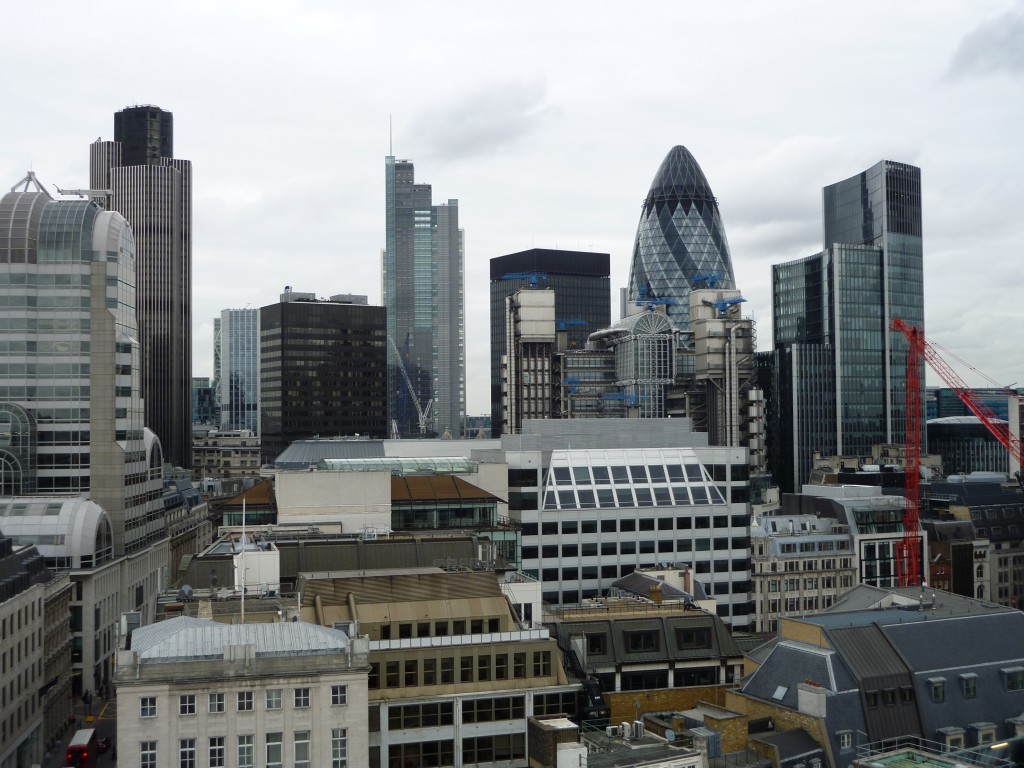 The City from the top of the Monument, 7th September 2011.

This entry was posted in Platform / Liberate Tate. Bookmark the permalink.