How I Spent My Spring Vacation

With planning now well underway for our third network meeting at Kings College London next month, I am grateful to Phil Smith for providing me with the following gem regarding a certain street we’ll be seeing a lot of:

“The Strand. The name is recorded in 1185 as Stronde and in 1220 as la Stranda. It is formed from the Old English “strand”, meaning bank or shore. Initially it referred to the shallow bank of the once much wider River Thames, before the construction of the Victoria Embankment.”

This is a salutary reminder that much of the built-up area around Kings, which looks so solid and forever, is constructed on landfill. And that the river is never far away – a river that we’ve tried to stop from flooding by constructing a massive tidal defence barrier. In the extreme case global warming scenarios, though — with polar ice sheets in meltdown and potential sea level rises in the tens of metres — those defences are unlikely to be enough. In Steve Waters’ recent play The Contingency Plan, one character discusses the image of Nelson staring out once again across an ocean that, with his Column now submerged underwater along with the rest of Trafalgar Square (which is, of course, at the other end of the Strand from Kings).

Since childhood I’ve associated “The Strand” with its place on the red zone of the Monopoly board – and thus with buying and selling, accumulation, capitalism…. But it was once, apparently, a sandy river shore. Today, when we hear the word “strand” at all in its original usage, it tends to be accompanied by the word “narrow” – as in “a narrow strand of beach”. So there’s something insubstantial and (that word again) precarious about the very concept. All of which puts me in mind of my family break last week on the North East coast, at Seahouses — a small fishing village from which generations of tourists have taken boats out to the Farne Islands to see the colonies of puffins, gulls and seals (the islands are now protected as a nature reserve by the National Trust).  Triangulated with Seahouses and the Farnes is Bamburgh — from each location the other two are clearly visible, like a kind of large natural stage of social and physical contrasts. The Farnes as rocky outcrops in the North Sea (they’ll presumably be quick to go under if the sea level rises – bye bye puffins!); Seahouses as a practical village of working people – once mainly in fishing, now mainly in tourism; and Bamburgh as a more upper-middle-class town of cream tea cafes, in the lea of the baronial seat of Bamburgh Castle as it looks out to sea over grassy dunes… 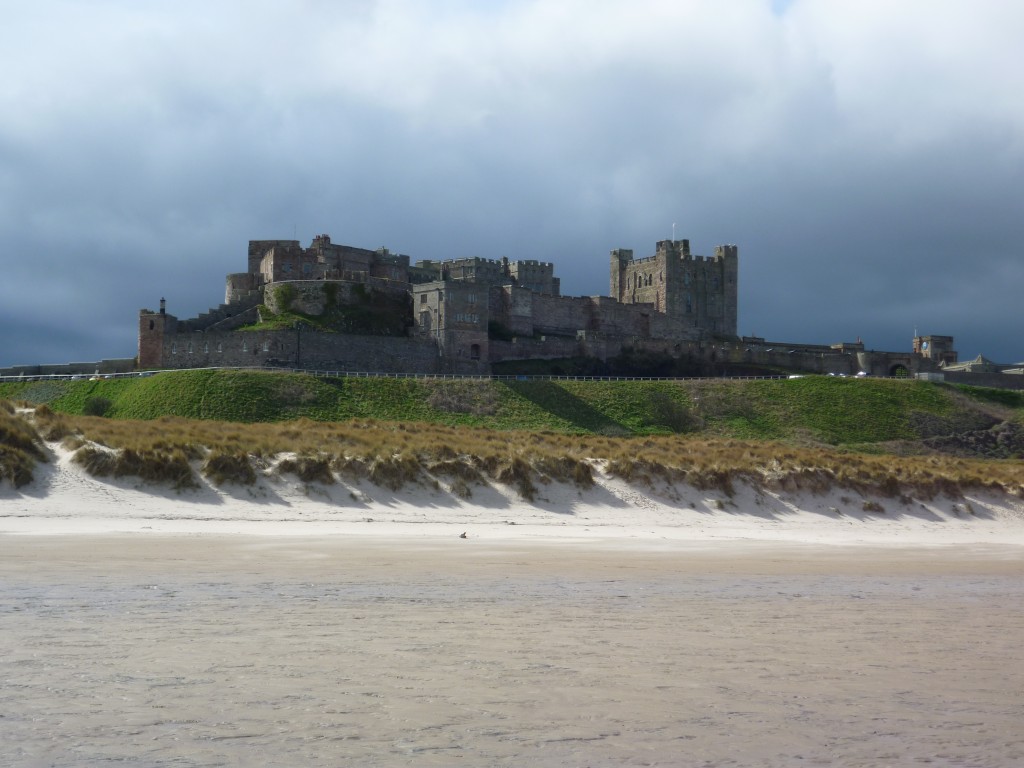 Bamburgh Castle, from the beach at low tide

The Castle is still privately owned by the Armstrong family, and it would be easy for a middle-aged wannabe socialist like me to make cheap remarks about aristocratic wealth. But castles, as Mike Hansell points out in his book Built by Animals (Oxford UP, 2007), are in essence defensive structures, and “our need for protection is no different from that of other species.” Hansell compares the three-ringed defences of Dun Aengus fort (off the coast of Ireland) with the three layers of defensive barrier that certain species of caterpillar will build on either side of themselves – along a plant stem – before spinning themselves cocoons in which they’ll become moths. Thought of in these terms, the imposing structure at Bamburgh has a kind of primal simplicity — built by vulnerable creatures to help them feel less exposed to predators and to the elements. Viewed in these terms, perhaps, the Castle has a much more organic relationship with the dunes it stands over than is first apparent. Dunes themselves are natural defences of land against sea, solidified by the grasses that grow into them. Yet they are also created by the sea, in a basic relational dynamic: the sea deposits sand on the beach (having eroded it from land elsewhere), and the sand is blown up the beach to form rough hills, or dunes. 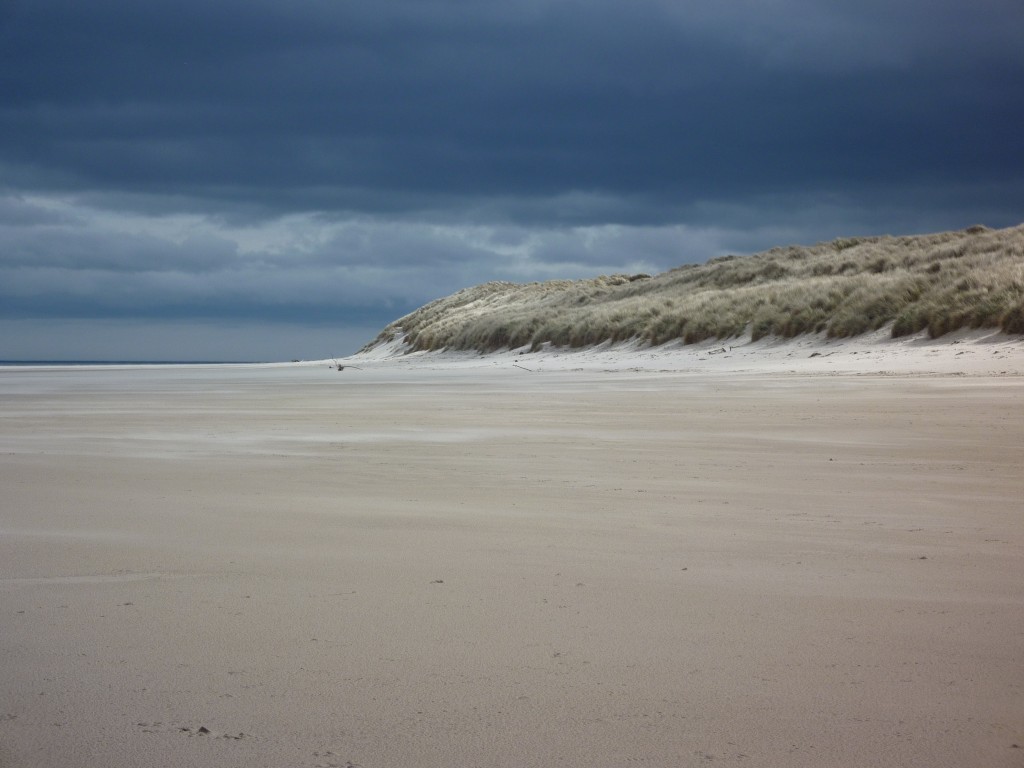 The whole time we spent on the beach as a family, this dynamic was being performed for us. As the waves came in and out on the shore, the gusting wind was also creating what I can only describe as waves in the grasses atop the dunes, and whipping up miniature sandstorms, racing up and down the beach, occasionally stinging exposed legs, arms, eyes. It’s a site in constant flux, but also with a certain natural equilibrium and stability.

I’m not going to dwell here on what would happen if winds and weather become more unstable, and sea levels rise — but the potentially catastrophic consequences were imaginatively illustrated by my partner Paula and six-year-old daughter Eleanor, as they built a series of sandcastles on the beach, in a reiteration of a time-honoured social performance. Each of the castles was ceremoniously named “Bamburgh Castle” by Eleanor, and then we watched as the tide came in and washed it away. Another Bamburgh Castle was duly built slightly further up the beach, and then the tide came in and washed it away. And so on. I think they constructed five or six of these things, in a Sisyphusian game of futile fun. The tide comes in quick, ultimately leaving just a narrow strand of beach…

The next day, on another bit of the beach nearer Seahouses, we replaced architectural assertion (sandcastles) with self-assertion (writing names in the sand). Here’s my homage to Eleanor…

And here’s Paula’s homage to herself: 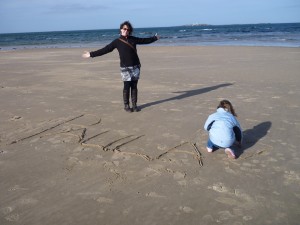 And here’s Eleanor’s reciprocal gesture for me (that’s “Daddy Steve” if you can’t quite make it out): 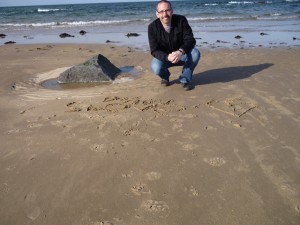 And here’s Eleanor on the same spot a few seconds later (taken, like the shot above, at 5.16pm): 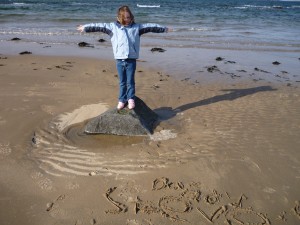 And this is the same spot one minute later, at 5.17pm (as the photos’ digital signatures confirm): 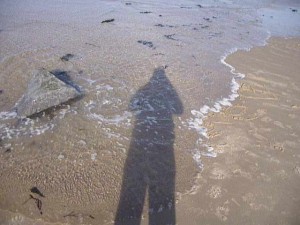 The birds on the Farnes, of course, are wise men who built their house upon the rocks: 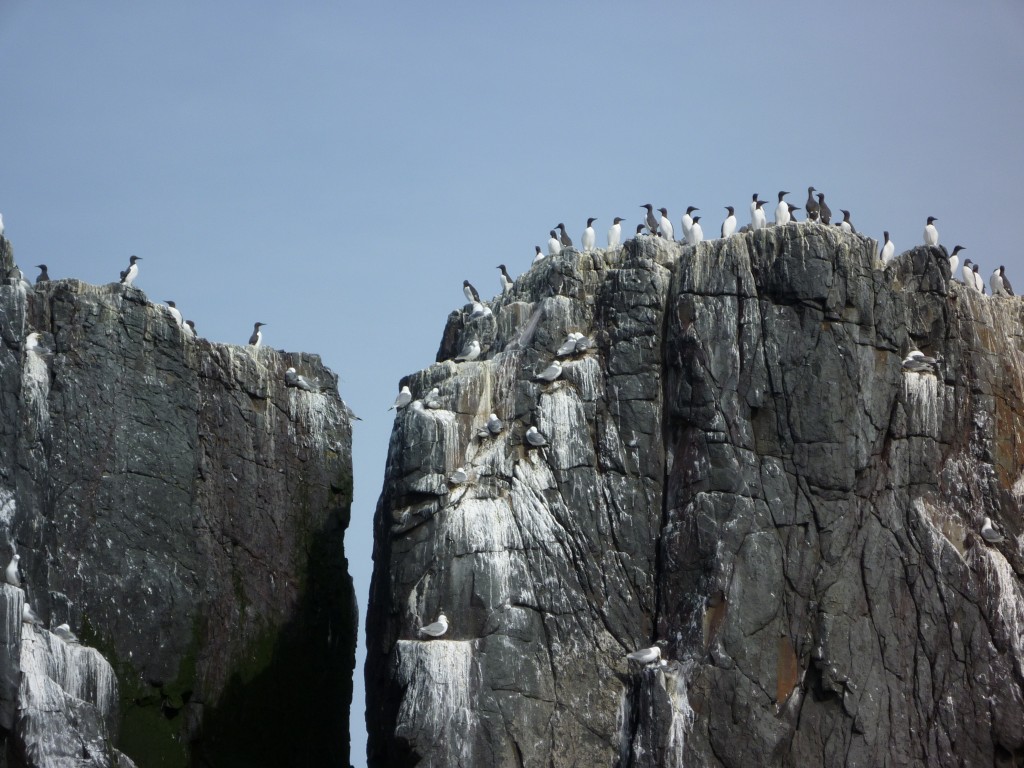 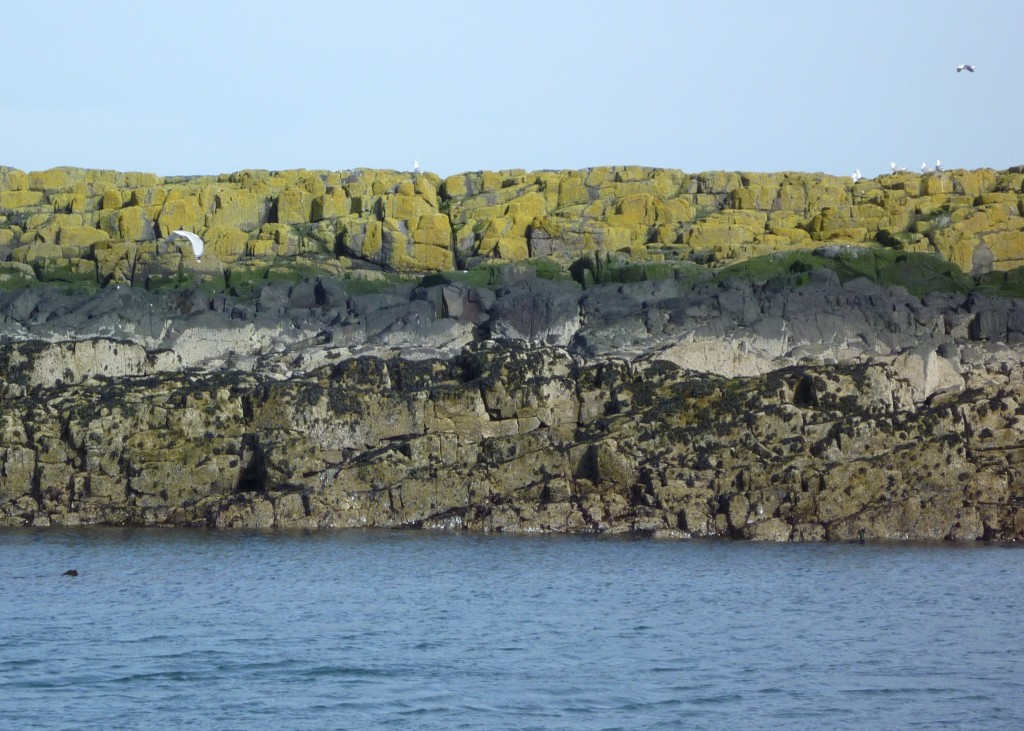 Another house built upon rocks (as its name suggests), is Cragside. It too is overseen by the National Trust (who preserve the habitats of both birds and rich people). It’s a few miles inland and to the South-west of Seahouses, near Rothbury, and was built by William Armstrong (before he bought Bamburgh Castle) as his country retreat from life as a pioneering industrialist in Victorian Newcastle: 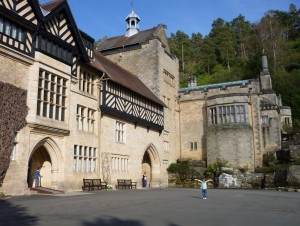 Armstrong was an inventive engineer – he developed the hydraulic crane, and then began to specialise in making really big guns and warships: half the Japanese ironclads that won their naval war with Russia in 1905 were built by Armstrong’s company. (He’d have fit right in at Faslane and Coulport.) Anyhoo, point is, Armstrong also liked to tinker with home improvements: Cragside was the first house anywhere to be partially powered by hydro-electricity (an early use of renewable energy), and the servants loved working there because of various labour-saving devices Armstrong installed for them (like a very early dishwasher). So he can’t have been all bad.

In 1884, the Prince and Princess of Wales famously paid a visit to Cragside (a whole new suite of apartments was built in their honour). This visit was highly unusual, since Armstrong hadn’t even been ennobled yet at that point, but they came because Armstrong had built in mod-cons that at the time you couldn’t even get at Sandringham — like central heating and running water. Things that Queen Victoria didn’t have but I do. And probably you do too. Which again puts a building like Bamburgh Castle in perspective…

For millennia, human beings have operated like every other animal on the planet – in relational equilibrium with their surroundings, building themselves homes as shelters, defences. But now, in little more than a century, human beings have come to take for granted the idea that our homes have self-regulating micro-climates. Feeling chilly? Turn up the central heating instead of putting another sweater on. Easy…. Except that this requires energy, and there isn’t yet enough hydro-electricity to go round… As a consequence of which, the tide is rising. 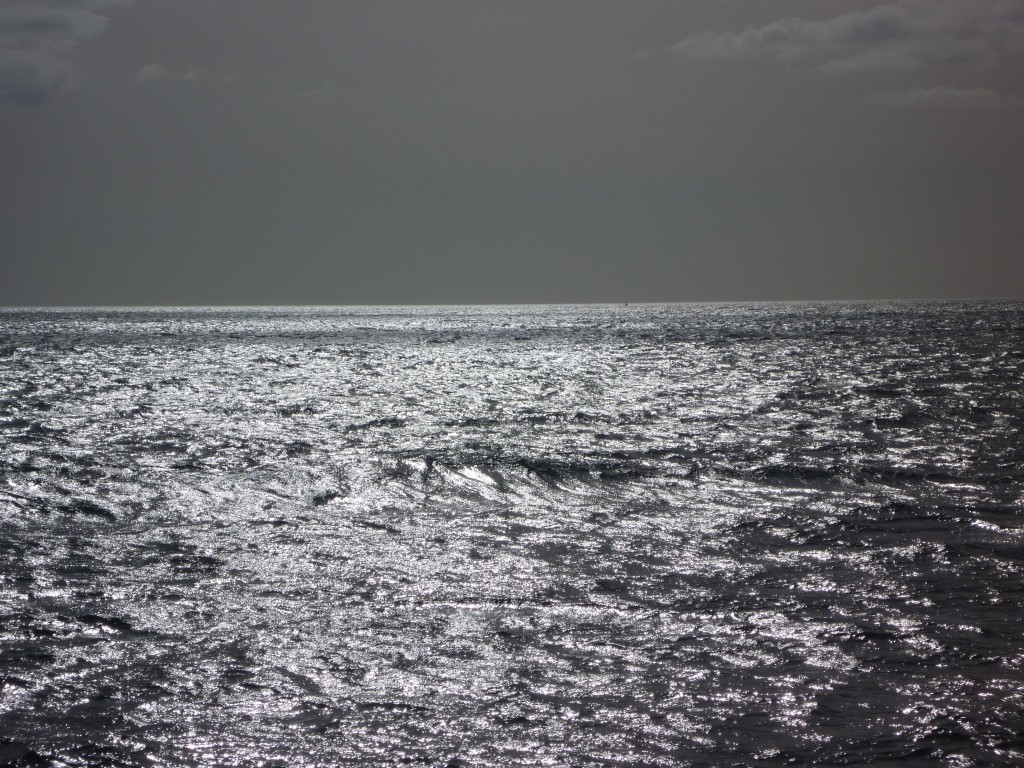 This entry was posted in Kings College. Bookmark the permalink.