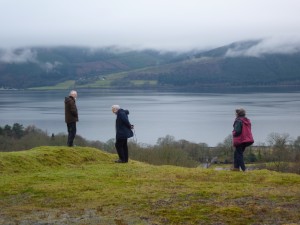 Cover shot for new album by Baz, Phil and Wallace.

At our weekend network meeting just past, Paula Kramer’s description of the Cove Park site as feeling “precarious” summed up and framed many of my own feelings about the location. Paula later acknowledged that she had in mind the positioning of this artist retreat in between the Faslane nuclear submarine base and the Coulport naval depot (to which the subs travel to collect their warheads from storage silos). Here we were, smack in the middle of Britain’s “independent nuclear deterrent,” and the flourescent green shading of many of the rocks and shells on the beachfront at Loch Long gave some cause for concern… Also precarious, at a time of arts funding cuts, is the future of Cove Park itself as an artists’ retreat: as its manager Julian Forrester pointed out, it’s hard to explain to potential funders the value of a facility whose “creative outputs” (the work produced by artists during or following their residencies) may bear little direct evidence of the location itself.

For me, though, that sense of precariousness also felt very immediate, very physical. Not when seated in Cove Park’s meeting hall / dining room, or when looking out of the window of my residential “cube”: these interior spaces, with their picture window views of the loch and mountains beyond, felt safe, stable and composed. But outside, navigating any of the paths down and around the hillside, was a different matter. The uneven ground, covered in scrubby, survivalist grasses, felt positively spongy underfoot — especially following Saturday night’s rainfall — and even the gravel paths had begun to be cut apart by rivulets of rain by Sunday morning, creating miniature geographies that echoed the interplay of lochs and landscape around us.

It was this sense of walking around on a hillside composed partially (substantially?) of water that pervaded my physical experience of the weekend — which is why I was drawn to make my “response piece” in the area directly below the wooden, A-frame bridge that leads walkers across a hillside waterfall and towards the site’s residential pods. Immediately past the bridge, set out below like a little stage for anyone standing on it, is a marshy area in which the stream from this waterfall merges with a confluence of other streams all flowing into this patch of low ground. [Click here for video:]

These streams gradually connect together through a criss-cross network before plunging into a small weir, which then siphons off a portion of the water flow to feed the calm, reflecting pool directly outside the cube I was staying in. 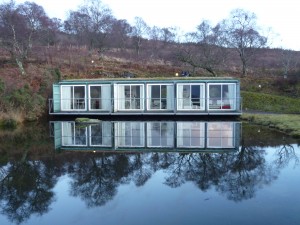 I spent quite a bit of time on Saturday afternoon edging about in that marshy patch of ground, testing for safe footfall, sometimes sinking in a bit too far for comfort, and figuring out multiple routes for jumping or stepping across the various streams. This activity (these “performance footprints”) also formed the basis of my presentation on the Sunday morning, except that overnight the flow of the various streams had become much more intense as a result of all the rainfall, so several of my route options had now become unsafe. My idea that I would highlight and mark out the presence of the multiple streams (for the audience above on the bridge) by stepping across them was mocked by the altered water flow — since even the smaller streams were now perfectly obvious from their gushing white water.  I did conclude, however, by beckoning my observers back up the path and pointing out the easily-missable beginnings of a tiny waterfall coming out of the hillside directly below the level of the path. By the time it flows together with the other streams, moments later, this trickle is as powerful as any of the others.

In an odd way, the idea of “reflecting on environmental change” became much more palpable to me through these activities – and indeed through watching the presentations of others (which I’ll shortly comment on in a separate, less ‘personal’ blog entry). This was a site which seemed to change, environmentally, almost by the hour (just as the view across the loch kept shifting, the granite mountains alternately shrouded by low-hanging cloud, then doused in sunshine). This was in contrast to our weekend at Fountains Abbey, where I was able to observe the impacts of environmental change (in that case unusually dry weather for the last several years, resulting in dried out hillsides, tree roots exposed, low water table and waterways clogged with weeds) but not feel immediately implicated in – or made vulnerable by – these changes. The heritage site as museum. At Cove Park, similarly, the buildings and their wide windows seem oriented to embrace the stable, the pictorial, the meditative (or reflective), in order to maximise the sense of safe “retreat” for the artists who come here — and yet outside, the ground itself often seems to be shifting underfoot. What would be the “tipping point”, in that marshy patch of land below the bridge? How much rain would need to fall before it became completely unsafe, and indeed quite foolhardy, for me to attempt to navigate the ground and jump the streams? How much “environmental change” before I’m swept off my feet in the deluge? 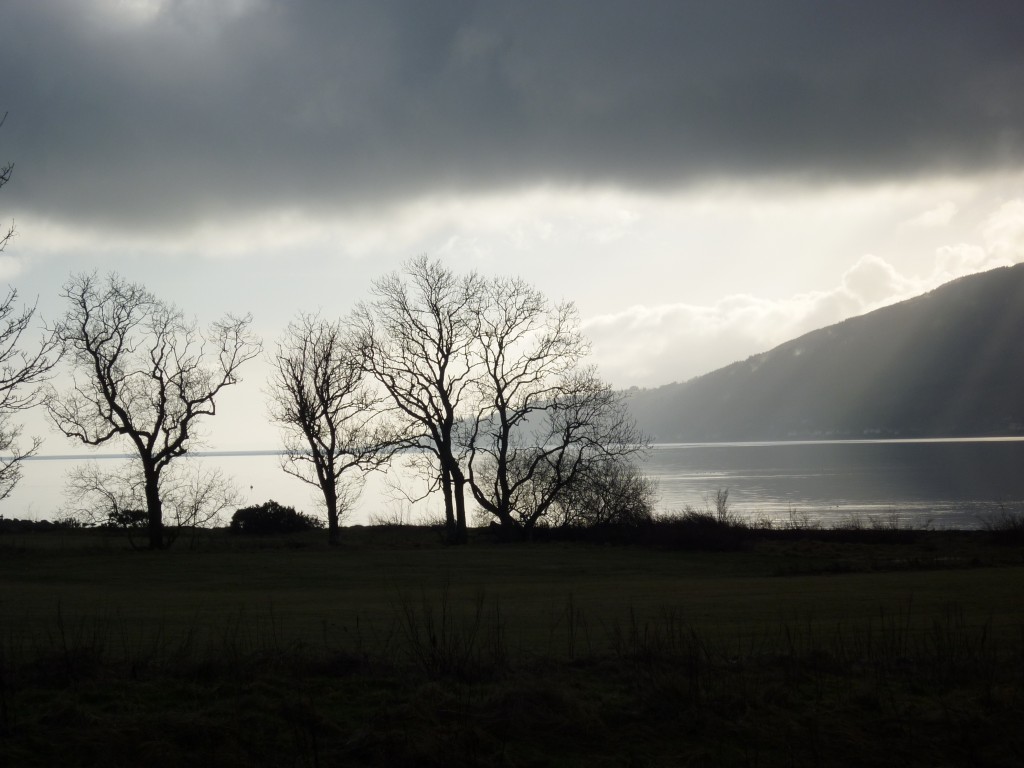 This entry was posted in Cove Park. Bookmark the permalink.