As the title of this post suggests, these are Phil’s notes rather than mine. He had meant to work them up more formally, but couldn’t find the time. Personally, I think they have an appealingly raw, performative energy even in their unvarnished state, so with Phil’s permission I’m posting them here alongside photos of my own. SB. 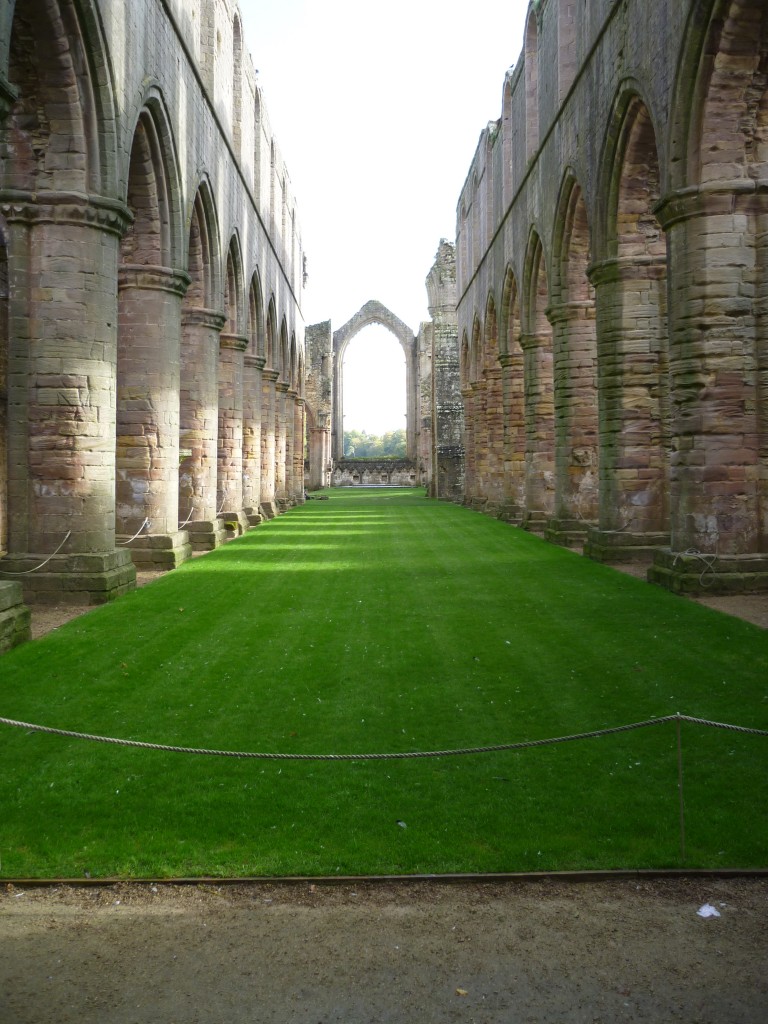 the Normans as non-racist colonialists

the abbey – a place of capital accumulation – the expansion of which generated a crisis in the 14th century (the manilla ring – holding the price of a slave in one’s hand – what is the equivalent here?)

every year a meeting in France – globalisation under Rome

RESTORE THE DIVISIONS OF THE NAVE – TODAY IT SUGGESTS A HUGE DEMOCRACY, REPLACE THE WALLS WITH GIANT CURTAINS 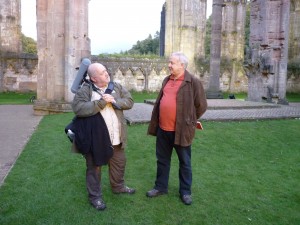 the attitude to nature – it is not a fixed ‘given’, but a gift, a tool – the river is redirected – floods – the past reasserting itself

“surprise” views  – the engineering of ‘spontaneity’

the eighteenth century Serpentine Tunnel – this seems to be a symbolical device, for there is a moment when the tunnel twists cutting off light from the entrance and it is necessary to take a single step into pitch darkness in order to see the first glow of light from the other end of the tunnel… this is a suggestive of a spiritual or esoteric process – through darkness into the light. – Stephen, you called the tunnel “completely gratuitous” but I wonder if it is not part of a very carefully constructed symbolic machine… 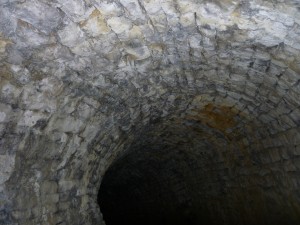 ENACT A MASS INDUCTION THROUGH THE TUNNEL – FROM THE HIERARCHICAL LOOKING TO THE BRUTAL AFTERMATH OF CARNIVAL AROUND THE POOLS – DARKNESS INTO LIGHT – THE RITUAL OF THE EARTH’S MASS EXTINCTIONS … EVERYTHING COVERED IN ASH, A CRASH SITE

there is a hierarchy of looking – the gardens here have been constructed to be observed (from the Temple of Fame) – spied upon – from the upper path – taking pleasure in looking (the manilla ring – holding the price of a slave in one’s hand – what is the equivalent here?)

(it should be noted here that I am proceeding as usual with low level paranoia, over-explaining in order to contest the ideological over-determination of under-explanation)

CLEAR THE PATHS OF TALLER SHRUBS AND TREES – THE IDEA OF THE UPPER PATH IS THAT THE GEOMETRICAL PATTERNS FADE IN AND OUT OF ECLIPSE, THEY ARE MOON POOLS – USE PERFORMANCE SO THAT THE AMBULANT SPECTATOR BECOMES THE LOOKING-PERFORMER, SEEING THE DIFFERENT NATURES/HERITAGES/MOONS COMING INTO ECLIPSE

we are told that the micro climate is “more and more unpredictable” – this is a fascinating description… what records are there of predictions for this micro-climate… if none, then how subjective are such comparisons between weathers that might be characterised as unexpected (a storm) and those that are not (a grey overcast day), but may equally have been unpredicted? – the role of storytelling and narrative in the discourse of climate change.

“things never used to be like this” … there is an appealing quality to this, the idea that we live in unique times, it gives us importance and significance… 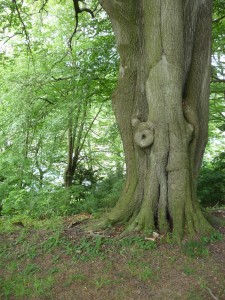 Trees are people too

the political aspect to thinning the woods – is there a sentimental attachment to the individual tree that overrides concern for the wood as a whole? “the empathy paradox – closeness to individual stories can often limit grasp of a ‘bigger picture’”

“BEHOLD THE WOOD OF THE CROSS, BEHOLD THE IRON” (DEATH OF TREES, EFFECT OF INDUSTRY)

there’s a strange concept – the “wood as a whole”? do we resist that making ‘organic’ and ‘machine-like’?

is the wood a leaderless mass, a form of large scale slime-mould? Are the imagined as Ents? Or attractive stage scenery. Animosity to the appearance of a thinned landscape – is this animosity the result of the democratisation of the eighteenth century picturesque – that there is an assumption that a healthy wood will be picture-like?

the thinned forest is an assault on the fantasy of the thick impenetrable forest as the place of human origins, the fairytale, Vico… and yet rather than these sexual forests, some believe that deer may have restricted (thinned) the great forests of Europe – that the ‘primal forest’ is much more like today’s New Forest than the dark forest of the Grimm Brothers. 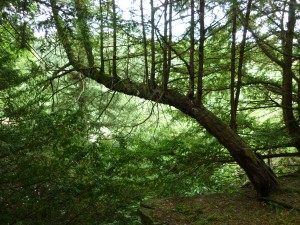 we walk the site together –

there is the industrial-religious complex of the abbey. with its machine of hospitality, the hotel a mark of its influence – this great expense, but to have great trains of opinion-formers and policy-makers entertained, rulers and soldiers pacified – entertained and inducted, accommodated and accommodating

SET UP WHAT APPEARS TO BE A PERFORMANCE, BUT THAT IS “AN ECONOMY OF BELLS” – each hour marked out by duties – RE-ESTABLISH THE ORDER OF SAINT BERNARD OF PROGRAMMES – the raising and the lowering of gaze, the art of living by bells, compartmentalisation (as the prerequisite for mystical happening)

this is now a cleaned ruin – like an eighteenth century painting – where was the romantic, theatre of such ruins – after Shakespeare and the desolation of the heath, it would return in the popular horror-gothic adaptations – the icy wastes where Frankenstein dialogues with monster, the ruined castle of the vampire.  there is a kind of ‘dread on a billiard table’ feel to these manicured ruins, the lawns around them are no less surreal than the green bathmat on which a stuffed bison once stood in Exeter’s museum … 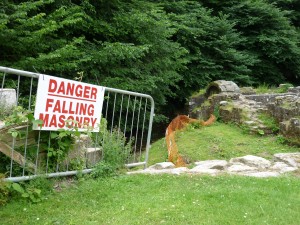 the linkage between the abbey ruins and eighteenth century gardens (geometrical, symbolic, with its Temple of Venus (later changed to Piety!)  – the Temple of Fame is made in wood, the Temple of Venus in stone… were we intended to draw some conclusion from this? Fame is temporary, but lust is eternal… I feel very uneasy in this area of linkage… I walk too quickly… I feel that I am being rushed by the landscape… I am being en-functioned… 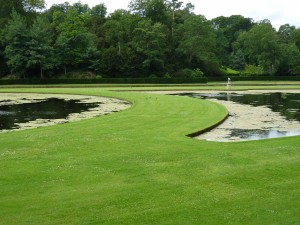 this is a decompression chamber (when I read over these notes I wonder if this is the key terrain from which to begin to think a performance?)

it is a bad joke in reverse – the eighteenth century garden is an insincere contrition – in the guise of a work of art, it is a massive act of enjoyment and sensuality – it laughs at those who do not recognise it – it is elitist and esoteric  (as if the misunderstood and romanticised Green Man in the abbey had begun to believe his own publicity and spread himself across the property)

“eyecatcher” – hmmm, that is too comforting

there is no helpful direction into the abbey  – one must make sense of it oneself… driven to the information boards… this is a rather helpful incoherence… as one struggles to picture the processes – aware that what remains may have been selected… selected ruins… ruin is not a natural process alone, there is choice, there is action, there is omission and commission…

“let’s see the killing of the deer”

NUMBERING THE TREES – USING THE LADDER USED WHEN SHOOTING PHEASANTS

THE NT SHOP SELLS BADGES OF CCTV CAMERAS – TO REMIND PEOPLE OF HOW THEY DISCIPLINE THEMSELVES – NOT SAFE, NOT FOR ME, NOT THE RIGHT WAY…

in protecting the tender feelings of the public, the Trust perpetuates an unrealistic narrative of their own management

what if we could see the excarnation of our own dead?  (I recently came upon a huge pile of human ashes beneath a tree in a ‘local beauty spot’.) 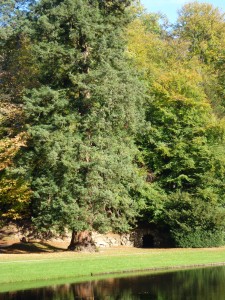 re-wilding   A DAY OF RUNNING ON ALL THE WALLS

wild by design   (a neo-sublime) … will always be comical

wilderness – a place of wild beasts –

ecology:  to preserve for future speculation/expropriation/exploitation

after listening to John Fox, a strange Mister Punch-like character said to me – “I want to save the world, but I don’t want to be Barry Bucknall.”  the set square, a shape in the cliffs – the freemasons’ symbol, the roof of masons buildings… MAKE A MASSIVE SET SQUARE AND PLACE IT IN THE GOUGE IN THE CLIFFS – rebuilding and fit the roof into the gouged shape – invite a Masonic lodge to meet there – in what sense is the abbey a simulacra (and a recreation) of an imagined and never existing Jerusalem?

“THEY HAD A DIFFERENT IDEA OF THE FUTURE TO US”

Q:  WHAT DOES THE PREY HAVE IN COMMON WITH ITS PREDATOR?

A:  WHAT OTHER QUESTIONS RENDER ‘NOTHING’ AS THEIR ANSWER?

Q: WHAT DOES NOT THE MASTER HAVE IN COMMON WITH HIS SERVANT?

Q:  WHAT SENSE DOES ‘NATURE’ OR ‘HERITAGE’ MAKE WITHOUT GOD?

A:  A PERFORMANCE ENTITLED ‘THERE’S NO SUCH THING AS…’

restore… but nowhere was “as it was”

ACKNOWLEDGE, SOMEWHERE, THE MALENESS OF THE ABBEY

we need  a new kind of wild – a social wild – a machine wild – a virtual wild… thinking of the dangerous ‘jungle’ playground of Huxley’s Brave New World – so, must a new wild be some version of tourism… is that such a problem…  an anti-tourism, a post-tourism…the precedents have been recorded, the models are already in place

wilding as a hobby – the abbey as primitive capital accumulation – how can we communicate ‘more lightly’? (this worries me) – at home/our place – surely the two are one? –

Mike: “resisting the vertical” – falling things (challenge to ‘the vertical’) “bits that fall off”  (without putting an importance or unimportance to that)

Mike:  not “intervention” and “connect”, but ablative “in the shadow”, “beside”

miniaturisation as a means to ‘holding’ values  (I hold these values, I have a model in my pocket)

“I’m part of the food chain”

what is it that migrates through all the species  (memes?)

where do the accidents happen here?

the bound man being breast fed

use the hotels to entertain “those responsible”

BUILD A CURTAIN BETWEEN THE ABBEY GROUNDS AND THE EIGHTEENTH CETURY GARDEN – A PORTAL (MARK THE CHANGE) … does the general visitor perceive the change or do they regard it all as a single entity (and what entity?)

“we will exploit you, but we will become you”  (THE NON-RACIST COLONIALIST)

‘we are predicting the unpredictable’

install a whirligig on the river

rename all the animals according to human usage of them – pigs become porks, horses become competitions (or exercises) , etc.

ON FRIDAY EVENING AND SATURDAY MORNING THERE IS BUILDING AND REBUILDING IN THE ABBEY, THE RE-ERECTION OF SCREENS, ASCETIC, BELLS, THE STRUCTURAL COMPOSITION OF BEHAVIOUR

ON SATURDAY EVENING THROUGH TO SUNDAY MORNING, THE UPPER PATHS ARE CLEARED OF OBSTRUCTIONS AND THE INITIATES FROM THE ABBEY ARE DIRECTED ALONG THE UPPER PATH, THROUGH THE TUNNEL, TO THE TEMPLE OF VENUS – PARTY AND BATHING – INDIFFERENCE  – AROUND THE PONDS ARE NUMEROUS MOTHERS WITH BABIES- THEY CREATE A SERIES OF GEOMETRICAL DANCES, SLOW WAX AND WANE 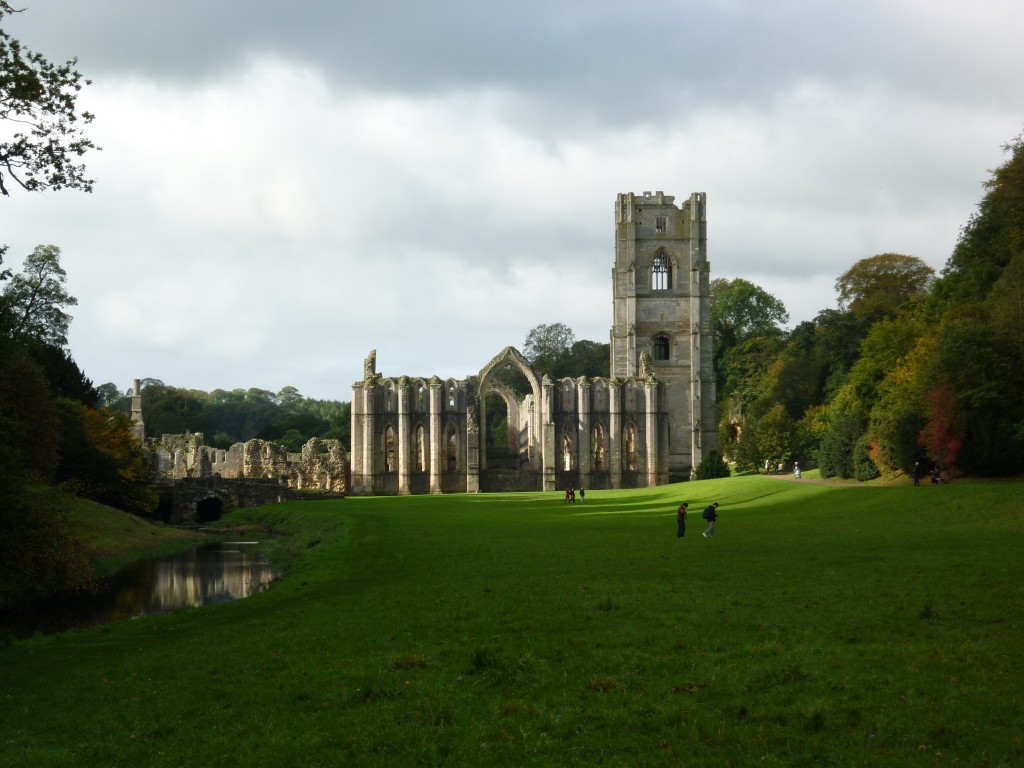