With our second network meeting, in Glasgow & Cove Park, coming up very shortly (Feb 11th-13th),  I thought I’d take a moment to prepare by looking back over the flipchart-scrawled notes from our Fountains Abbey weekend last October. There are other forms of documentation from that event of course — including digital audio recordings of several of our discussions, which I can circulate to anyone who’s interested to review them — but the flipchart pages seem to have been afforded some kind of spurious authority as a summary of our deliberations so it may be useful to collate some points from them (though, looking back, they are horribly fragmentary, and capture only a sniff of what was discussed).

There’s a summary sheet here with a number of broad headings, which were arrived at as a kind of digest of other discussions. I’ve tried to make sense of the annotations through fleshing them out with a little more commentary. In their transferable abstraction, these headings may (or may not) also prove useful as a kind of template / guide to apply when thinking about Cove Park as a performative site:

1. TEMPORAL LAYERS. What does the site reveal (whether visibly or through narrative commentary on what is visible/invisible) about its own history of human intervention in the environment? What narrative continuities and/or discontinuities (i.e. past moments of rupture, crisis) are legible? Or indeed, in what ways has the site been ‘airbrushed’ to conceal or disguise the fractures of history; to introduce nostalgic or romantic views of the past?

At Fountains Abbey, of course, these temporal-historical issues are very much apparent to anyone paying attention: but how might they apply at Cove Park, set in a more ‘rugged’, ‘unspoiled’ location, and surrounded by a nature reserve in which the ‘wild’ has ostensibly been preserved/contained? And what of the present uses of Loch Long? (e.g. nuclear submarine base)

2. ACCESS AND INTERPRETATION. What routes through the site are suggested or invited by its existing layout and presentation? What kinds of response are invited by signage and available information? Who has access to the site, and at what price? What kinds of ‘privilege’ does such access suggest (and how does this relate to the histories of privilege associated with a site such as Fountains/Studley) ?

And what might all this say, in ecological terms, about the way the site is ‘normally’ conceived –e.g. in connection with or self-contained isolation from its surroundings?; e.g. as a ‘live’ location/stage for natural processes (migration, erosion, biodiversity etc.)?; or as an ’empty space’ referencing either the people currently being asked to make ourselves present in it, and/or the absent humans who have occupied this (museum) location in the past?; etc.

3. SCALE AND SUBJECTIVITY: How do (or how have) people orientate(d) themselves in relation to the physical landscape of the site? How does the scale of the human figure relate to the macro- and/or micro- dimensions of the location? For example, at Fountains Abbey/Studley Royal, the individual is very much immersed within (subject to?) a shifting landscape that cannot be comprehended from a single perspective (except perhaps via the affected omniscience of the overhead map). Indeed, the ‘pictureseque’ landscaping of the Water Gardens would have aimed to evoke an awestruck sense of the Sublime in man’s confrontation with landscape and nature… And yet the site has also been made subservient to human control via the monumentality of additions to the landscape varying from the Cistercian Abbey itself to the sculpted figures and ‘eye-catchers’ of the 18th. C. garden designers (i.e. the landscape as extension, reflection and expression of human subjectivity and/or divine dominion [which arguably amounts to the same thing]).

Again, how will these reflections relate to the ostensibly ‘wilder’, but equally mythologised landscape of Scotland’s lochs and mountains, as visible at Cove Park?

4. CURRENT ENVIRONMENTAL THREATS / STRESSES: In what ways does the site make apparent the factors threatening (or at least changing) it ecologically? And how are these threats being ‘managed’ on a daily basis? At Fountains, the estate has to be micro-managed to preserve its historic fabric, but ironically it is the history of the site’s management that creates some of the stress factors (e.g. over-planting of trees on the hillsides resulting in exhausted soils; e.g. re-routing of River Skell by monks adding to the Abbey’s vulnerability to flooding when the banks burst and the water resumes its ‘natural’ course). On the macro-scale, can (human-driven) “climate change” also be seen to be threatening the site? Again, at Fountains, persistently low average rainfall over the last decade has left soils dry and the river level low — and thus especially vulnerable to occasional torrential “weather events”  such as the 2007 floods.

5. DISSENSUS / AMBIVALENCE /RUINS. One of the key factors marking our discussions at the Fountains event was a degree of underlying disagreement — which perhaps needs to be discussed head-on in future meetings — about how best to address the ‘issues’ arising…  The ruins of the abbey, and its ghosts of Christian apocalypticism, made some wary of the contemporary tendency toward ‘apocalyptic’ judgements about the state of the environment: aren’t we rather too attracted towards ‘doomsday’ scenarios? (cf. Hollywood eco-blockbusters etc.)  Aren’t we better to express a sense of ecological relationships through circumspection, indirection, an embrace of complexity (or ‘mental biodiversity’?) ? There again, might such approaches not amount to an evasion or obfuscation of pressing questions?

Reviewing the flipchart sheets and my own notes from Fountains, it’s this unresolved sense of ambivalence that seems to loom largest — not least in relation to the site itself, which seems to have attracted appreciation/awe and suspicion/unease from us in almost equal measure. Perhaps we’ll find ourselves needing to confront such ambivalence more frankly at Cove Park. Or perhaps that site will retrospectively cast the whole Fountains discussion into a different kind of perspective…

With ambivalence very much in mind, I’m adding below some further flipchart-derived notes about Fountains, in various states of coherence (but perhaps with some value as memory-joggers). These are interspersed with some distinctly ambivalent photographs of vapour trails seen from the Abbey’s grounds at sunset, Saturday 16th October 2010.

SITE AS A SPECTACLE OF TEMPORAL/HISTORICAL LAYERS:

– and yet monks charged with reception of strangers/visitors (cf. reception of Christ amongst us?) … service and hospitality

–  yet “picturesque” landscaping tradition rooted in (romantic construction of) human awe before nature / the sublime….

NT visitors / members – afforded sense of privilege (culture?) through their visits…? What of class profile of visitors (or indeed ethnic profile, gender profile…) ?

Abbey as spectacle of ruin / traces of monastic dissolution / Doomsday 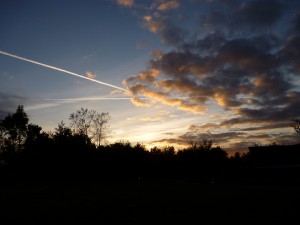 As with the “sweep of history”, the different physical elements of the site “flow” into each other; yet are also marked by points of crisis / breakage (cf. the remains of the precinct wall, dividing “Abbey” turf and “Studley” turf)

Migration through spaces –   the same elements and yet changing/different:

People flowing in and out (once monks and visitors; now tourists)

Performative confusion of signposted routes through the site: “chaos” of layout / “incoherent” series of spaces? Strange signage; privileged access or denial of access to certain areas (go “off path”?); “access for wheelchair users”

Over-managed? “Packaged place.” Too neat / too clean ? “empty” of rough edges…  (sentimentalised? Dishonest?)  Stark contrast to the wild place of swamps and thorns described by original monkish settlers (but do we risk romanticising that too?)

Ambivalent responses: Attraction to the site’s beauty and theatricality, simultaneous with suspicion towards its micromanagement; eco implications.

Entirely artificial site, and yet a natural site (the topography, the river, the trees and soils….)

Nature and “Us” in dissensus

… and yet also too big and diverse an estate to get a visual grasp on the whole; human body immersed in landscape, moves through it (no god-like omniscience except through mapping diagrams…) (moving through the Serpentine Tunnel; plunging into sculpted darkness / rectum)

A defamiliarising or “alienating” landscape? Unnatural nature. Brechtian perspectives. Potential for demystification / de-“naturalisation” of “the environment”.

Site as document of historical moments? – “moments when people were making decisions”… choices made in site’s evolution

Stimulate relations of responsibility through highlighting such perspectives?  Reconnecting people with awareness of “human impact” on nature/landscape.

Temporality of landscape – remembering and forgetting?

How do different communities of people now connect to this site and its (fractured) history? Connectivity / disconnectivity

Potential of the ablative: working in the shadow of / in the vicinity of / in proximity to… approaching indirectly 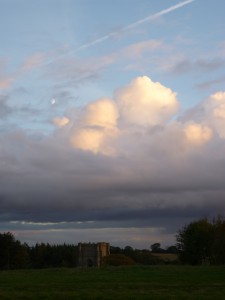 2 Responses to Looking Back, Looking Forward