I have found it difficult to compose a blog – there are too many possibilities, too many paths to choose. Throughout the weekend I felt acutely conscious of the layers of silt and rubbish that formed the site, and the material traces of people who had been there before. Shaping thoughts into a pattern involves a process of sedimentation which takes time. So what’s here for now? I thought I’d use these first musings to reflect on the ecologies of learning invoked for me by layering the experiences of the weekend on top of my own interest in performative pedagogies and set alongside the intervention of the Friday talks. And the word that I keep returning to is ‘attentiveness’.

I am interested in the idea of attentiveness as a way of suggesting the kind of affective engagement with things – human, non-human, imagined, material – that disrupts the orderliness of the world and invites learning to become intimate. In reflecting on learning and environmental change, I am interested in how to bridge the gap between what we do now, domestically and in the everyday, and how we might imagine (re-imagine?) the future. For me, this is not about constructing or absorbing dystopic narratives – what Alan Reid described as an education of terror – in which we might position ourselves (or children) as either anti-heroes or saviours, but in the quiet moments of attentiveness in which we make one choice rather than another. It is this attention to the intimacy of domestic details and the opportunity to work creatively in the vernacular spaces of everyday life that has the potential for what Lefebvre calls the ‘politics of small achievements’. Perhaps this is what Bachelard in means in The Poetics of Space when he talks of attending to the ‘dynamic virtues of miniature thinking’ which he sees both as ‘beyond logic’ and as a stimulus for ‘profound values’ (1994, pp. 150-151). 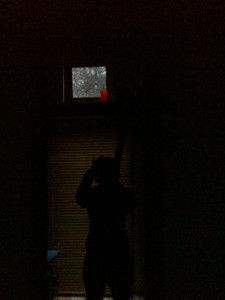 I am reminded of the images we saw from Fevered Sleep’s Weather Factory – the moss in the bathroom, the mist hovering inside the house and the excess of pendant lights – each of which held a fragmented world in domestic miniature. Steve mentioned smallness in his blog, and it was interesting that Sally’s light, Dee’s miniature installation and Paula’s kinaesthetic connection with the movement of trees, in different ways, condensed complex thought into theatrical image. Theatre, performance, the relational aesthetic of the arts can insist on this kind of attentiveness, and I think it is the affect of attentiveness that has the potential to re-order thought and change environments. When Jane Bennett refers to the ‘self-criticism of conceptualization, a sensory attentiveness to the qualitative singularity of the object, the exercise of an unrealistic imagination, and the courage of a clown’ (2010, p. 15) she is actually talking about the pedagogy of Adorno’s negative dialectics, but there is something in that sensory attentiveness that seems to me to link art, subjectivity and learning in ways that might just create the conditions for thinking through environmental change. 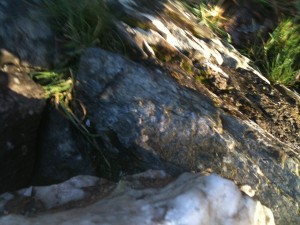 Layers of rock on a wall

What I am plugging away at is finding a way to bridge the pedagogical gap between the apocalyptic imagery of disaster movies and just carrying on as we are. I am suggesting that this is about the affect of scale. It is also about time, and I am drawn to Alan Reid’s idea of a slow pedagogy in which the cumulative layering of one miniature moment on top of another reshapes the everyday and inspires new practices. What is the role of the arts all this? I am not sure that Giroux’s model of critical pedagogy (the one that was at the bottom of Alan’s grid) quite does it. Sure, it focuses on practices, activity, critical engagement, dialogue and all those other progressive education virtues, but in the process it assumes an Ideal Speech Situation that is not always as ‘empowering’ as its rhetoric claims. Elizabeth Ellsworth was heavily criticised in the 1980s for saying exactly that, and her response is instructive for debates about the pedagogy of climate change. She advocates a pedagogy of place that is constructed spatially and dynamically, through ‘a complex moving web of inter-relationalities’ (2005, p. 24). It is attentive to the movement of bodies, to memory, forgetting, sound, smell, taste – it  marks the limits of me and you (or self and other) and offers encounters with an outside in ways that prompt thinking about the ‘unthought’. Ellsworth uses Winnicott’s idea of transitional space to theorise this approach to learning – and although I am not sure that her emphasis on Winnicott’s anxious projections quite does it for me, it offers one way to start questioning the relational aesthetics of artistic engagement and its contribution to learning and knowing. I am searching for a vocabulary to witness moments of witnessing – attending to the aesthetic doubleness in which affect becomes visible and understood, at least temporarily.

Cove Park reminded me to be attentive to the aesthetic vulnerability of learning, its intimacy and messiness. It was interesting that many people chose to work alone but also beside people (in Eve Sedgwick’s sense) – my own interest in layering as Steve rightly picked up was amplified by conversations with JD on Saturday and the imagery of cereal boxes was inspired by Fevered Sleep’s dramatisation of accumulation in On Ageing. I am sure that other people’s work was were similarly non-linear, associative and layered. This form of learning may have something to do with what Nigel Thrift calls ‘third order knowledge’ – it involves both attention and inattention, when past selves and future selves are not conceived as binaries but layered, embodied, responsive, in relation and in dynamic unity. 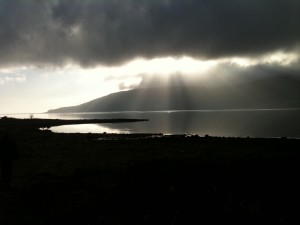 Layers of Fluff on sea

This entry was posted in Cove Park. Bookmark the permalink.