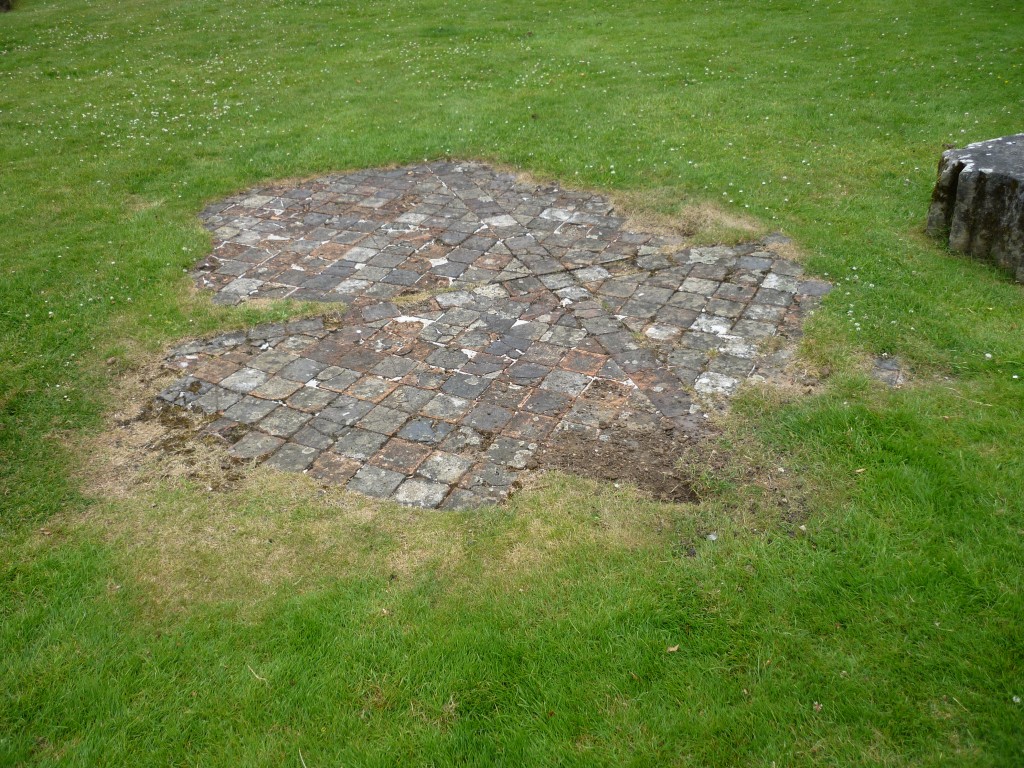 Scratch at the grass, and a medieval floor appears (or is this an American town viewed from the air?)

This week I made my first site visit to the Fountains Abbey / Studley Royal estate since we secured the network grant. I was reminded how perfect this site is as an exhibit of the way that humans here have responded to, and reshaped, the environment over centuries — from the 12th C. monks who chose the natural rock ravine of the Skell valley as a sheltered site for their monastery (and then proceeded to redirect the flow of the river), to the 18th C. landscape architects who laid out the gorgeous water gardens further down the valley. By the time the Abbey and its grounds were bought up and joined onto the Studley Royal estate, landscaping fashions had changed to embrace a certain romantic wildness rather than pristine cultivation — and that too is reflected in the rugged-and-yet-sculpted look of the valley walk. So much here to explore and reflect on.

A meeting with the estate’s Learning and Interpretation Officer Tessa Goldsmith and with Head of Landscape Michael Ridsdale proved very encouraging for the project: they seem keen to contribute to the network discussion, and to collaborate in facilitating a potential site-specific performance project here, somewhere down the line. Tessa is to send me a CD containing an 500-page archeologist’s report on the site’s entire human history. She is, herself, a mine of information on the estate and the way its history is constantly being performed for visitors, school children and so forth. (The estate’s properties, she mentions, include about 150 monk’s habits of various sizes, for re-enactment purposes.) 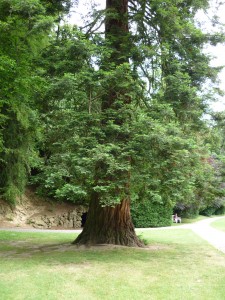 A Giant Redwood. Not native to Yorkshire.

It’s also depressingly clear, though, how immediate the question of environmental change is on a site like this. Michael, who when asked about his specific job remit explains that “if it grows or flows” on the estate, he is responsible for it, has worked at Fountains since 1984. Although he confesses that his evidence is anecdotal, he believes that the last five years or so have seen a marked change in climate conditions — with sudden shifts in weather and temperature becoming much more prevalent than previously. Only last month, the sudden cold snap we had in the midst of the warm May/June weather brought temperatures on the estate down to minus 8 degrees Celsius, killing a sweet chestnut tree. Most native species are not equipped to cope with rapid temperature changes of this sort.

The most pronounced recent climatic impact on the estate came with the heavy rain and flooding of summer 2007, when severe damage was done to the Georgian water gardens. The river became so swollen that it burst its banks and returned to its natural course down the middle of the valley that runs between the Abbey and the water gardens.

I’m struck by the fact that, in the centre of the Moon Pond – the water garden’s centrepiece – is a statue of Neptune, God of the Sea. Yet the water surrounding him is not (or at least not normally) a roaring ocean, but an utterly still, placid pond. There’s a performative assertion in this image, something along the lines of “look, we are godlike, we can control and subdue the elements, bend them to our control.” The Enlightenment’s self-delusions in a nutshell? Rather wonderfully though, during a recent renovation of the pond’s landscaping, “toad ramps” were built in for easier amphibian perambulation around the site.  Does this represent progress (a more genuinely enlightened consideration of the needs of “lesser” species?), or further evidence of our urge to micro-manage the environment? 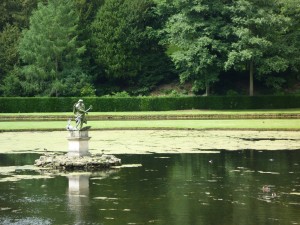 Neptune of the lilies

This entry was posted in Fountains Abbey and tagged flooding, site history, trees. Bookmark the permalink.